Pre-Register For Diablo Immortal And Unlock The Horadrim Cosmetic Set!

Blizzard has announced a pre-registration incentive for Diablo Immortal! If pre-registrations reach 30 million globally, players can unlock an exclusive Horadrim cosmetic set for each class!

As you spend more time with Diablo Immortal, crushing demons and collecting loot, you’re going to transform. And that’s only natural. Tweaking your look, your playstyle, and even your class is core to the game. In this blog, we’ll go over two big ways to shape your character: cosmetics and the class change feature.

First up, we’re excited to finally talk about cosmetics—how they work, how often you can expect new ones, and how to unlock your first one right now. (“We” are Principal Designer Joe Grubb and Art Director Hunter Schulz. Hi!)

Cosmetics let you radically change your character’s appearance without affecting your gear or stats. Think of them as a new visual you can apply instead of your equipment.

Cosmetics are acquired per class, though each cosmetic set is available to every class. They affect your outfits and the look of your weapons; a few include custom animations. Here’s an example of how the same cosmetic set changes the appearance of different classes.

This is the Bloodsworn cosmetic set, themed around the minions of the Countess in the Dark Wood.

In Diablo Immortal, your character’s normal gear fits their anatomy by design. There isn’t, for example, a suit of armor that will make your crusader bigger or smaller. Cosmetics let us break the mold, and transform your character’s appearance into something different, even otherworldly. Here’s the necromancer (and their gear) altered by the Ghosts of Ashwold cosmetic set.

Our plan is to roll out a new cosmetic set for all classes each month, themed after the month’s Battle Pass (Ghosts of Ashwold, above, is first). Picking up the Battle Pass for a given month will allow you to unlock that cosmetic for all classes, and the Empowered Battle Pass will also include custom portal skins and portrait frames.

Other cosmetics will be available in the Shop—some very closely tied to the world and backstory of Sanctuary, while others are classic theme shifts, like a set that has your character encased in ice crystals or dressed in the royal garb of Westmarch.

We also want to make room for cool free cosmetics, and a number are earned through play. Members of the Immortal faction have their own exclusive cosmetic sets unlocked as they raise their faction’s Dominance stat (which they can wear until they’re overthrown, naturally).

An Immortal faction wizard in the Anointed Immortal cosmetic set.

Pre-Register for Diablo Immortal in one of the following ways:

As you start to level up your Legendary Gems, you’ll also see their growing power reflected in your gear. Every Legendary item in the game has its own unique visual progress to accompany your gems’ growing Resonance. At the highest levels of your Resonance stat, you’ll even unlock cosmetic wings. 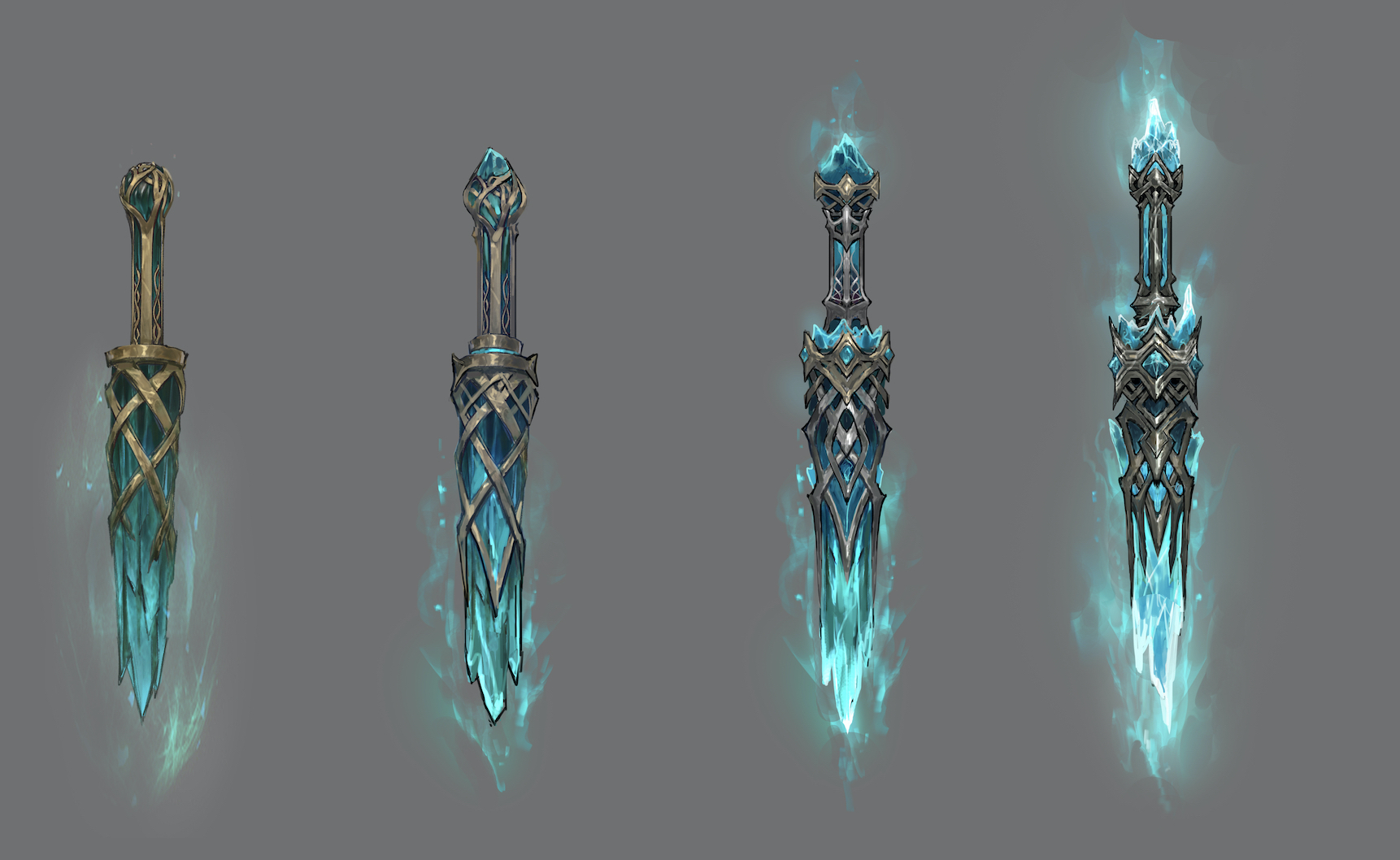 Concept for Resonance impact on the Wizard Legendary Thunderbird’s Bite

Like any living game, we want Diablo Immortal’s visual identity to evolve and grow over time. And we also want you to be able to keep varying your character’s look as you play, rather than being stuck in one spot. We’re inspired by a lot of these designs, and we can’t wait to show off even more when Immortal launches.

Speaking of mixing it up, we’ll turn this blog over to Senior Systems Designer Kris Zierhut to talk about changing your class and avoiding the dreaded “alt-itis.”

Character progression is incredibly important in Diablo Immortal. When you play games in the MMO genre, you’re focused on unlocking new abilities for your character and keeping up with other players on your server. However, Diablo games always feature a rich variety of classes with different playstyles and fantasies. This leads to a conflict: you want to play every class, but you don’t want to hinder your character’s progress to try them all. How can we let you do both? Our solution, arriving shortly after Diablo Immortal launches: Class Change.

In Westmarch, you’ll be able to change your existing character to a new class and a new visual customization. When you change your class, you’ll retain all your progress on Paragon levels. You’ll receive a new set of equipped items appropriate to your new class, and you can transfer all of your item progress and gems to them. None of your old equipped items or stash will be lost, and your progress on Horadric Vessels and the Helliquary will stick around too.

You will need to start collecting Legendary items specific to your new class, but that journey’s part of the fun of playing. And, if you regret the choice, you can activate the Class Change feature again, returning to your original class, or exploring other new classes you haven’t yet played. When you return to a class, you’ll revert to the visual customization you chose previously, and equip your previous Legendary items.

We didn’t want to force our players into the hard choice of giving up progress on their main character to support an alt. We also didn’t want anyone to feel obligated to keep a roster of alt characters to gather rewards and resources, or to match the shifting demands of Leaderboards, Cycle of Strife, or other competitive systems. Class Change gives you the freedom to explore classes that you get from multiple alts, but without any of those downsides. It also allows us to give full rewards to each new character you play, with no expectation you’ll share resources among them.

We want your original class selection to be a meaningful choice, so we’re discussing limits to this system that still give you freedom to try out something new. Because the process of collecting Legendary affixes is time-consuming, we expect players who focus on a single class will have some advantages, like a broader selection of available character builds. But the fun of freely exploring each class should tempt a lot of people into changing things up over time, like it has many of us on the team. Though Class Change won’t be in-game right when Diablo Immortal launches, we’re hoping to add it shortly thereafter in a patch.

Immortal is shaping up to be the most customizable Diablo experience we’ve ever delivered, but the variety we’ll have at release is just the beginning. We’re excited for you to join us in Sanctuary!