Season 12 will be ending on the following dates:

Season 13 will begin about two weeks afterward on the dates below:

You can view the official blog post below for more information on the season rollover process, and what to expect!

Here we are again, nephalem. As we prepare to close out another Season in Diablo III, it's time to take a moment to remember what you have achieved and ensure that you're ready for the next. If you haven't experienced the end of a Season, there's a lot to know about what happens to your gear, your progress, and your characters. Don't fret! We're here to give you a full overview of what to expect when the current Season ends and the next one begins. The Season Rollover If you've played through a Season before, you know that all the gold, gear, and Paragon experience you earned don't just disappear. But what exactly happens to all that hard-earned progress when a Season ends? The short answer is that you get to keep just about all of it. Here's a list of all the rewards from this Season you can expect your non-Seasonal heroes to enjoy: Heroes Gold Paragon Experience Blood Shards Items Artisan Progress and Recipes Shared Stash Achievements Kanai's Cube Season 12 Rewards Note: All heroes, rewards, and progress will convert to the appropriate non-Seasonal game mode. Any items, gold, Paragon experience, achievements, Artisan levels or recipes, Stash space, and Blood Shards earned on Normal Seasonal heroes will transfer to your Normal non-Seasonal heroes when the Season is over. Similarly, anything you’ve earned on Hardcore Seasonal heroes will transfer to your Hardcore non-Season heroes instead. Season 12 Conquests Unlike other rewards, Conquests do not roll over at the end of the Season (because they aren’t available to non-Seasonal heroes). This also means that your non-Seasonal Achievement point total will not be affected by any Conquests you earn during a Season. 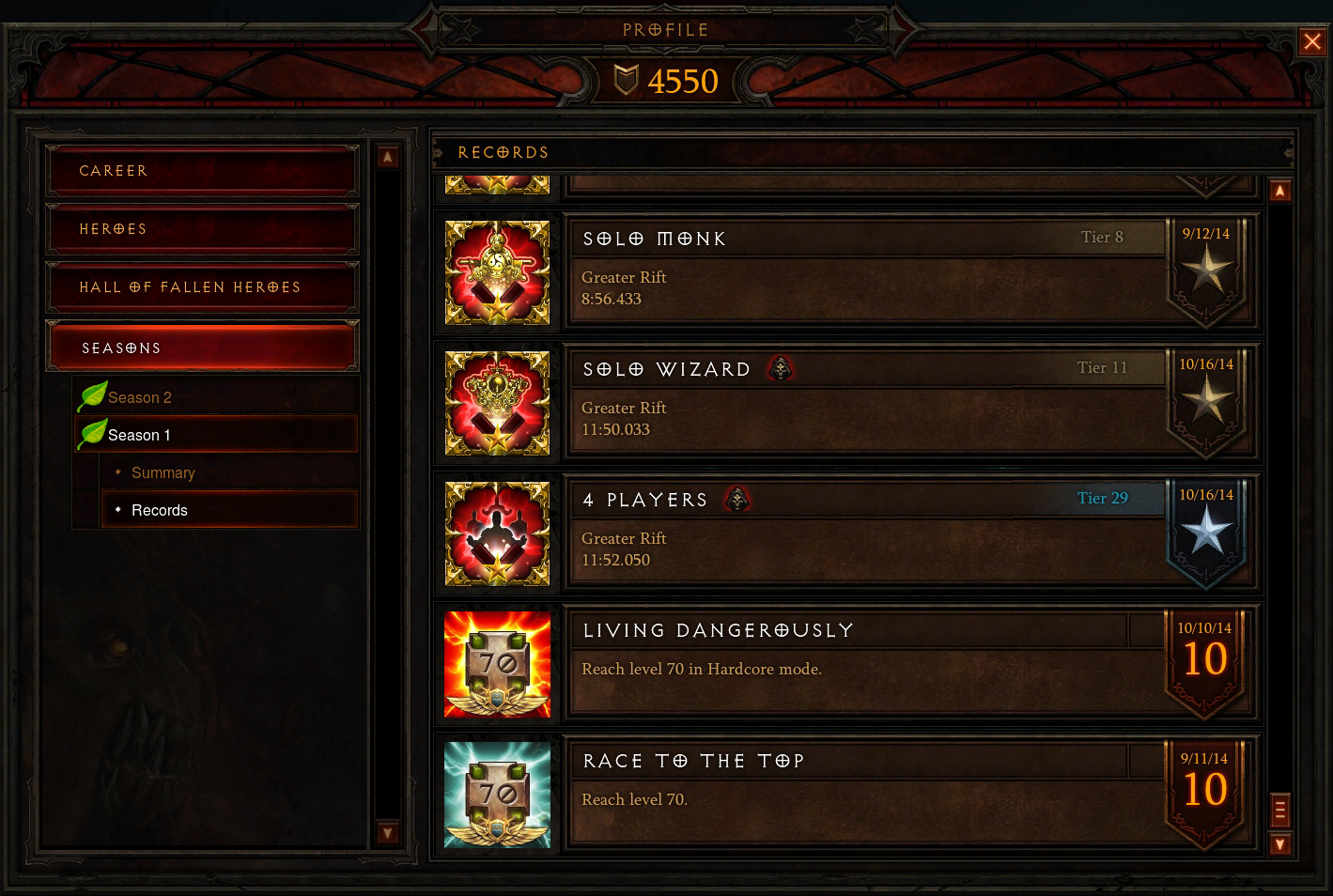 In addition, the non-Seasonal Greater Rift Leaderboards on PC will be wiped sometime after the end of the Season. However, players on this platform can immediately compete in the currently active Era with their non-Seasonal heroes (including those who have just rolled over), and will not have to wait for the start of the next Season. Season 12 End & Season 13 Start Dates You can sort through your Seasonal rewards and review your progress on the Leaderboards between Seasons. It’s a great time to reflect on the accomplishments you’ve made and enjoy the fruits of your pre- and post-Season loot hunts! Season 12 will end on the following dates: Season 13 will begin about two weeks afterward on the dates below: For time zone assistance, check out this handy guide. We look forward to seeing you in Season 13! Ready for the Rollover? How have you fared during Season 12? What was the highest Greater Rift you reached? Did you complete any Conquests? Any other exciting accomplishments to share? Let us know in the comments!