Remember how some time ago, before Reaper of Souls, we had these cool suggestions from the community on a somewhat regular basis?

Ideas from MVP MrMonstrosity, which went from trading and dungeon changes, through big tweaks to the Loot system (dubbed Loot 2.0), to suggestions like timed dungeons and rankings; from DFans member DamienJohn, who envisioned a challenge mode that greatly resembles Bounties; and even seemingly unnoticed threads on how Goblins could leave their portals open - all of which have a few elements implemented in the latest patches, and which make Diablo 3 a more enjoyable experience.

The fans probably miss those too. And everyone just really wants to know where Diablo 3 could be headed after the first big content Patch! Maybe the hiatus is over, and suggestions like the ones below might spark a new wave of fanmade suggestions that make their way into an eventual second expansion (promise us!!!).

DiabloFans member Edriel and italian MVP Saya (aka uranux on DFans) have both put together interesting illustrated (!) ideas. Edriel's include the Battlegrounds of Eternity and the Black Realm. And Saya's suggestion has concepts like the Army Event, a Talisman mechanic and a Karma system. Today we will feature a really small snippet of Edriel's thread (and some of the pretty screenshots!) but, truth be told, they simply don't do justice to the original. So make sure to check Edriel's thread if the prospect got you excited as well!

I thought it would be really really nice to revisit old places, redo old quests and kill again old bosses.

But how to make it happen without ruining the lore?

In the battlefields of eternity, in act 5, you can find "time prisons" where battles of the past got time-stopped.
When you "pop" the "time bubble", the monsters will "awake" and attack you.
I thought that in the mess that it is the Pandemonium Fortress (and its surroundings), there might also be "time-bubbles" that bring you back in time.

I don't know if it could fit the lore, but anyway I think that the Battlegrounds of Eternity could be a nice addition to the game.

So, what are BoE?
The Battlegrounds of Eternity are maps where you have to complete quests in order to progress and then kill the final boss.
Pretty easy, but the nice things are that you will redo old quests, kill old enemies (such as Baal, Mephisto etc.) and that you will compete against other players.

Let's start with some images so you'll have a better idea of my suggestion: 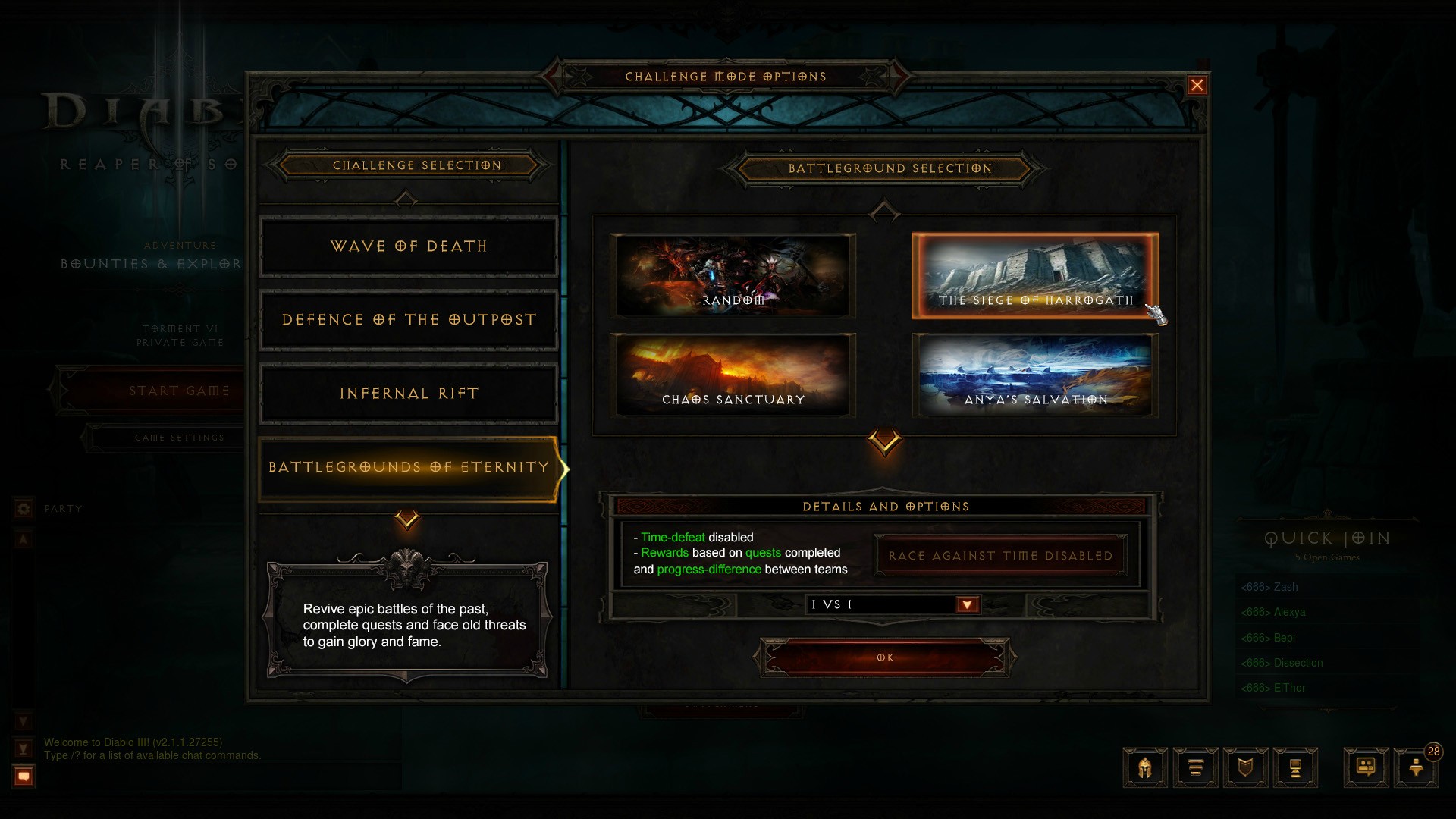 Rewards based on quests completed and progress-difference between teams
This means that the more quests you complete (in a battleground there are bonus quests that you can skip) and the more difference there is between your team progress and the enemy team progress, the more rewards will get the winner team.
"Which rewards?" you might ask... well I don't know. Depends what Blizzard has in mind with PvP/PvEvP (if they'll ever implement it): they could be "PvP points" for ladder ranking or a "PvP currency" that allows you to buy PvP cosmetic rewards, sigils, banners etc.

Let's now jump inside a game: 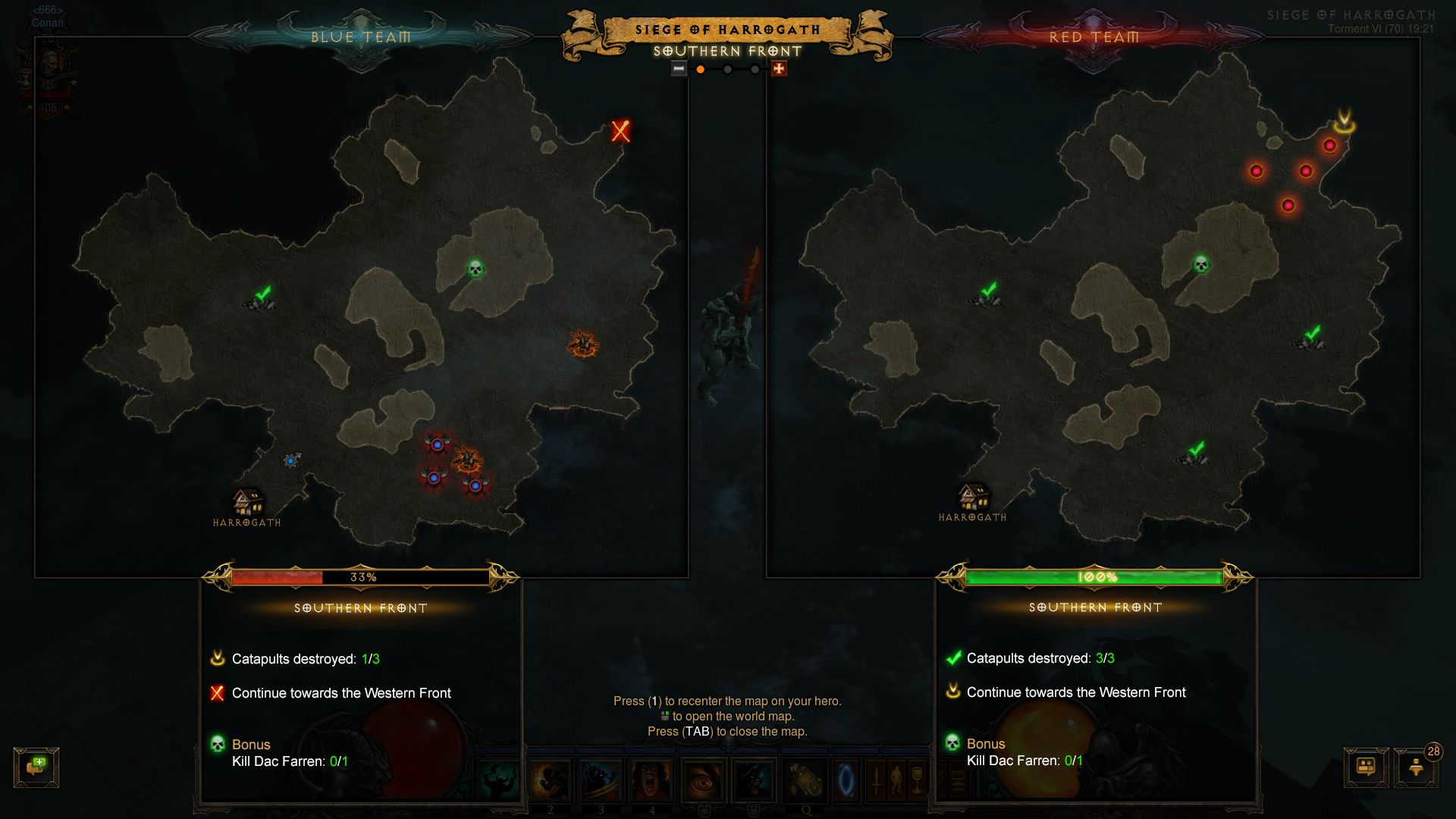 Who of you does remember Dac Farren?

Did you wonder where the fragments of the Black Soulstone have gone?
They're spread all over Sanctuary and while many evil souls have been released, some of them are still inside these fragments and are trying to get free.
This influences the Nephalems' sleep making their dreams become nightmares.

While in these nightmares the physical body of the Nephalems will remain safe but their minds might become corrupted.
In order to maintain sanity and to purify the fragment, the Nephalems must destroy the "Nightmare Summoning Portals" and at last the Black Realm boss.
Unfortunately many Nephalems are "connected" to these fragments and only the fastest one (team) have the possibility to escape the nightmare.

How it works
Both teams will play on a random generated map with exactely the same shape, placement of the monsters, monsters type, etc.
Every map has 4 portals and each of them spawn on a different lane (more on this later) and they'll keep summoning monsters on a regular basis.
These monsters will always follow the players, no matter how far they are. 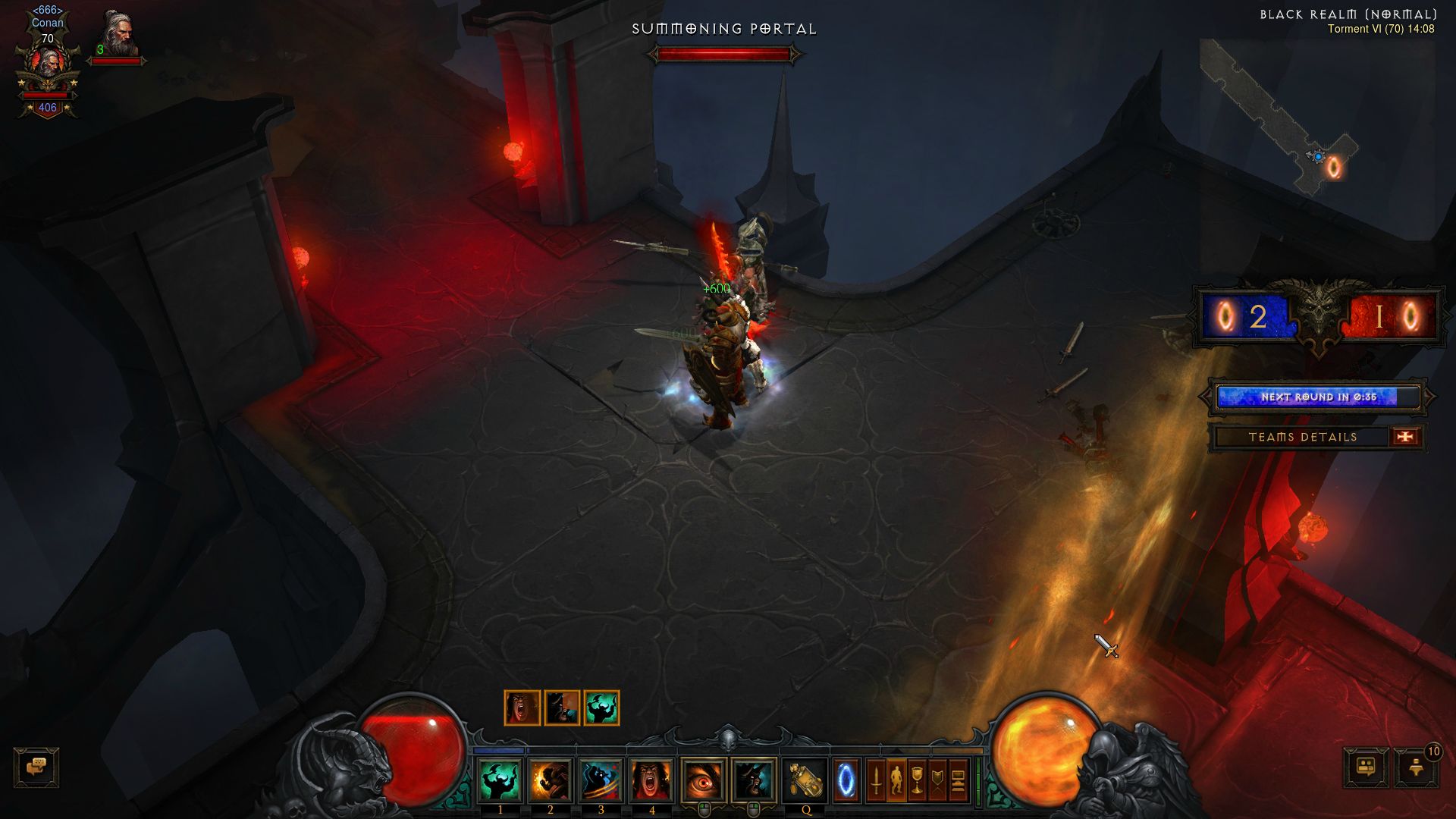 Team Minions
Team Minions are the monsters that are summoned for the enemy team at the start of a new round and that will help your team to slow the enemy one.
As I wrote earlier, these minions have their damage, health and movement speed increased by 50% and they do NOT count as kills. 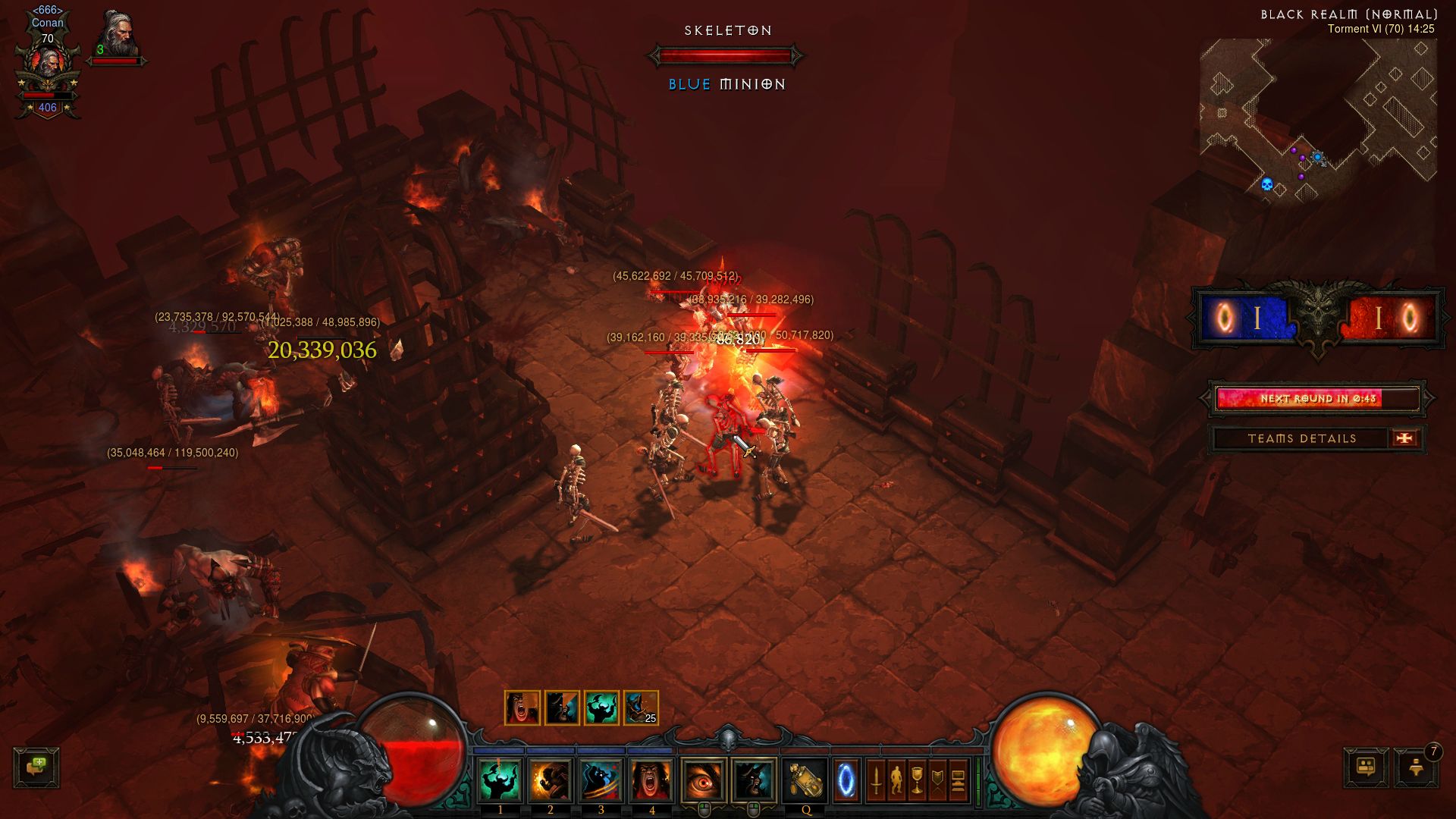 A Blue Minion has spawned to fight the Red Team 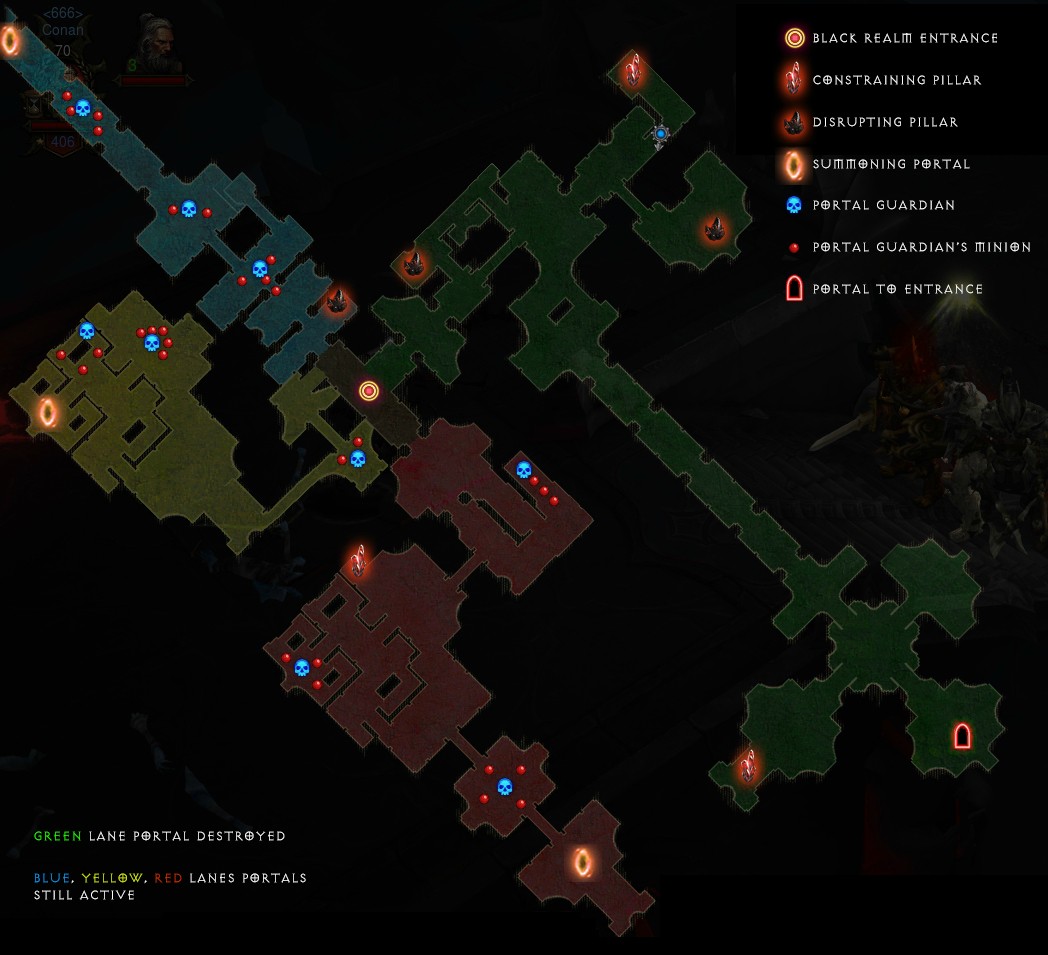 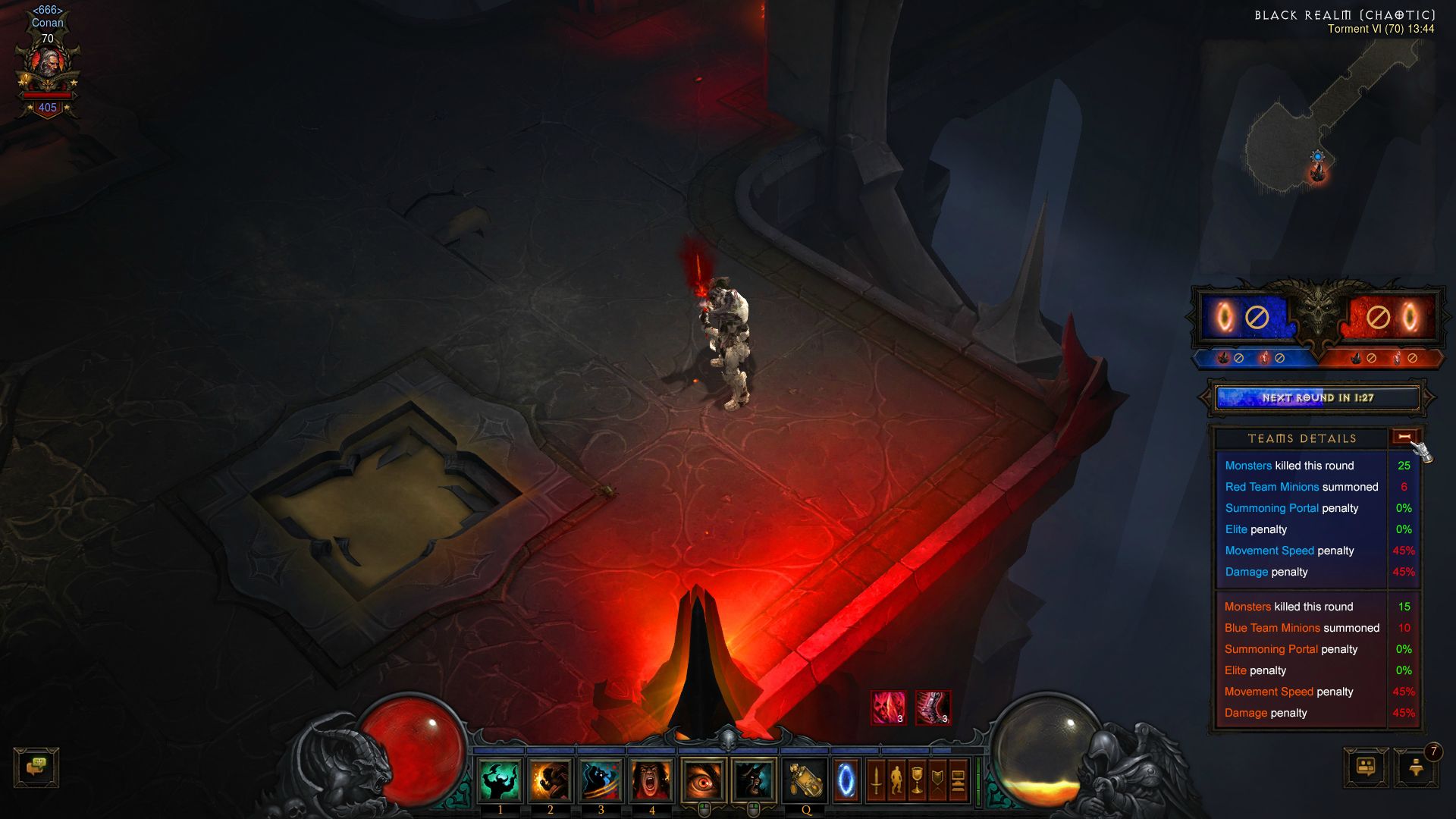 It appears that Blizzard had some critical server issues this weekend, with lots of players having connection problems throughout saturday. The problems seem to be mostly solved now, but either way this serves as a heads-up, a warning to hardcore players who could be surprised by these problems, and end up losing their precious characters to a disconnect. Read below.

After a recent investigation into reports of disconnection and high levels of latency we have discovered several critical issues with our servers. We are currently working with our Internet Service Provider to restore connections and gradually bring everyone back online.