Help Register Sign In
(Source) After the announcement of the removal of yet another point-mashing feature (seen in our coverage of the press event), many are wondering how the Diablo III team rationalizes not having skill points while preaching customization to the masses. A user on the official Battle.net forum board brought the question to Bashiok's table, who responded with the sentiments of the team.

Their explanation leans back on the "it's not Diablo II" argument which has been touted since the game's announcement back in 2008:

We've been playing the game, we know what skill points were causing, and it was not interesting and unique builds. It was not meaningful customization. It was maxing out a couple skills, and that's it. It was Diablo II. What we have now actually forces people to make interesting choices, to craft interesting builds based on very strict limitations. 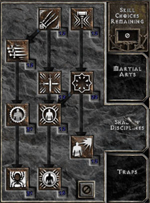 But the Diablo III team wants the latest game in the series to go beyond, as they see it, another shortcoming they saw in Diablo II's skill system. Bashiok says that "one common mistake people are making is thinking all the class skills are straight damaging attack skills... There's no variety because you just pick the most powerful six, and you're done."

Their latest iteration of the skill system essentially splits what would have been called passive and active skills in Diablo II into two exactly that: passive and active skills. Where passive skills are invested in separately and contribute to your character's brawn in secret, regular skills are the ones you will use to blast your enemies into gooey bits, as well as zip around the screen at lightning speeds and issue combo attacks. Not all of these skills are straight damage dealers. Some of them allow resource regeneration or life steal, which adds another level of tactical flare to your combat experience.

synergies), the new skill system in Diablo III scales your skills based on your level. In addition,

runestones, including their numerous tiers, affect the look, feel, and effects of your skills. Beyond them, gear directly affects your battle potency. Bashiok laid out a Diablo II scenario for demonstration:

The base problem with skill points is that we found they simply put too much incentive toward pumping up one or two skills. If we wanted to balance the game it means we'd have to let someone be able to essentially beat the game with that build since it's the most obvious. You're not going to put a few points here, a few there, you're going to go the D2 route, horde points, and dump them all into a core skill or two. It really limited builds since points always went toward specific types of attacks that scaled well with additional points, and we're not going to keep systems that are stifling (viable) build potential and (meaningful) character customization.


So, removing functionality encourages customization? While many would argue the case of stat point removal for Diablo III, this might not be exactly the same thing. Regardless, this solution does directly address the "one or two skills" scenario (Diablo II cookie-cutter builds, anyone?), so maybe it is a big step in the right direction.

Interestingly enough, the removal of skill point allotment indirectly addresses yet another controversial topic: respeccing. Many have argued that allowing for respeccing caters to a "softer" gaming audience and drains the game of an element of challenge (just take a look through a 2008 article's responses). Without skill points, there's no longer any need for respeccing. Whether or not this appeases more hardcore players is another question entirely.

Force had some excellent one-on-one time with Jay Wilson to get the full story straight from the Diablo man, himself. Wilson talked about everything leading up to the latest decision, including observations from alpha testing and conclusions drawn from prior strategy scenarios in the older games.


But does all this wishy-washy skill softness mean something more than encouraging more diverse builds? As a user on the Battle.net board asked, "Do you come upon a particularly nasty group that this other skill would just be perfect for, so you hang back, grab that skill, then destroy the group?"

Bashiok did not shoot the idea down entirely:

You're far more likely to see a player sticking with a build and working to become better at it than constantly swapping around. That's not a rule, it's player psychology so there's going to be a wide range of variables, but it's what we have found to be true not only for Diablo III, but a lot of the games out there with similar free-swapping of builds.


The removal of skill points seems like a step away from the spirit of the franchise, instilled in us with Diablo II. It will restrict cookie-cutter and low-skill-count builds to an extent, and it indirectly removes the need for a controversial respeccing system. But it is a far cry different from the original games and many "Diablo clones," possibly alienating parts of an otherwise eager audience.
Posts Quoted:
Reply
Clear All Quotes