Hell on the Horizon: Diablo IV Coming in 2023

Diablo IV has been confirmed for a 2023 release date, and the Necromancer as it's 5th playable class! PC/Console crossplay and couch co-op has also been confirmed! You can signup for beta here!

During the 2022 Xbox Games Showcase Event we told the story of an unremitting conflict between the Burning Hells and High Heavens, foretold the return of Lilith, Sanctuary’s demonic creator, and shared scorching-hot details around the next installment in the Diablo saga—Diablo IV.

Before you read further, we are excited to announce that Diablo IV will launch in 2023 on Windows PC, Xbox One X|S, Xbox Series X|S, PlayStation 4/5 and will host cross-play and cross-progression for all platforms. On console, players may also slay demons side-by-side with a friend through couch-co-op. We have another bone-chilling announcement: in addition to the Barbarian, Druid, Rogue, and Sorceress, the fifth and final class available at launch is the scythe-wielding purveyor of death, the Necromancer!

If the flames of our hellish segment of the showcase died down before you could gaze upon them, do not fret, we have provided all the invitingly dark details below. Grab a spot around the campfire as we shed some light on Diablo IV! 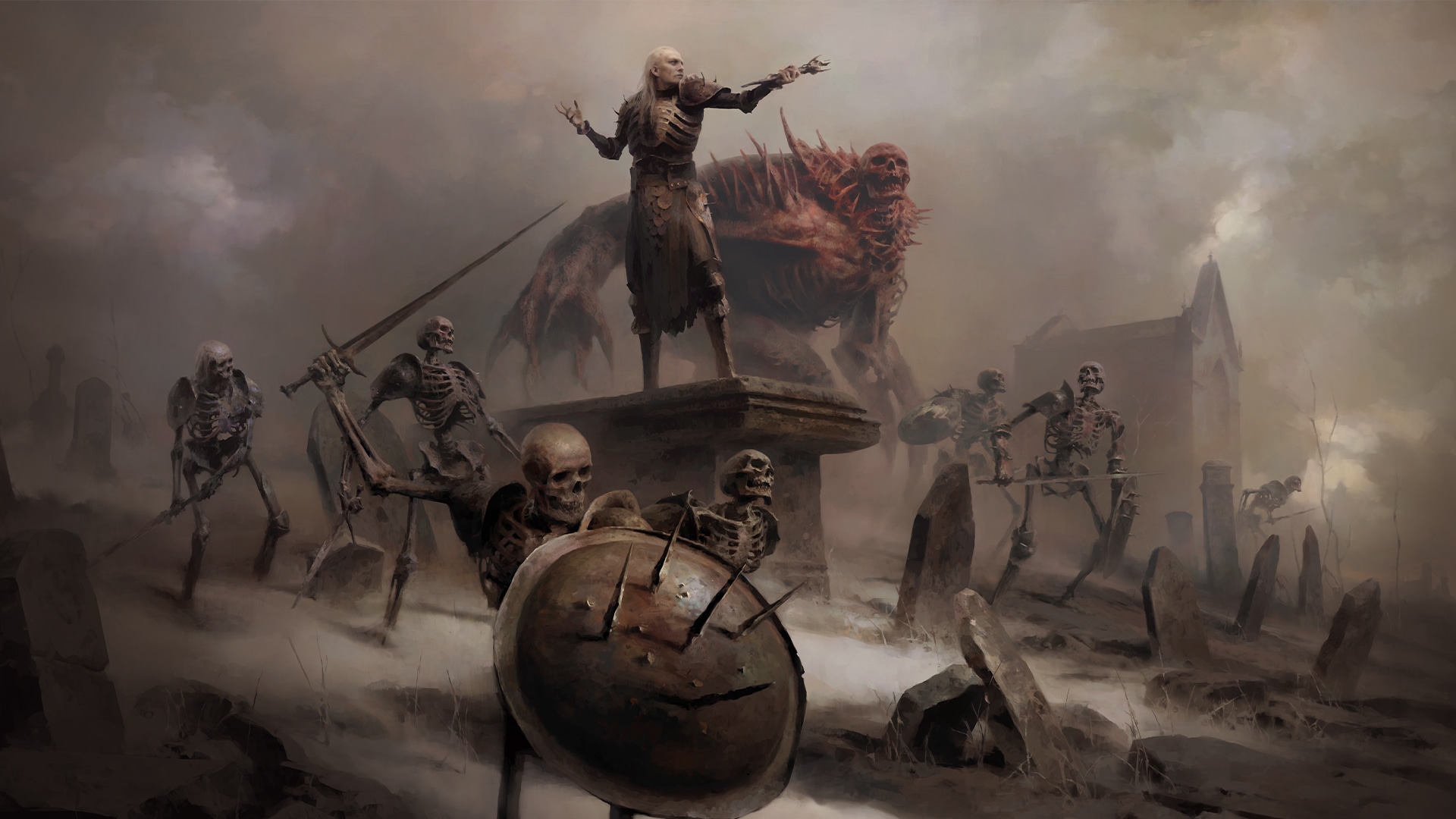 As a Priest of Rathma, known by outsiders as a Necromancer—the word death evokes a sensation of power, potentially even excitement when it graces their ear. These legendary summoners bend blood, bone, and darkness to their will, and subjugate the ranks of the undead to carry out their bidding. Unknowing adversaries who pick a fight with this death-defying class will quickly learn they’ve made a grave mistake, for they are darkness in its wake.

We have a casket-full of news to share with you around how the Necromancer class will decimate and reanimate demons in Diablo IV. Take a gander at our June 2022 Diablo IV Quarterly Update blog coming out tomorrow at 10 a.m. PDT to learn more about the class’s new mechanics, such as the Book of the Dead, with Lead Class Designer, Adam Jackson. 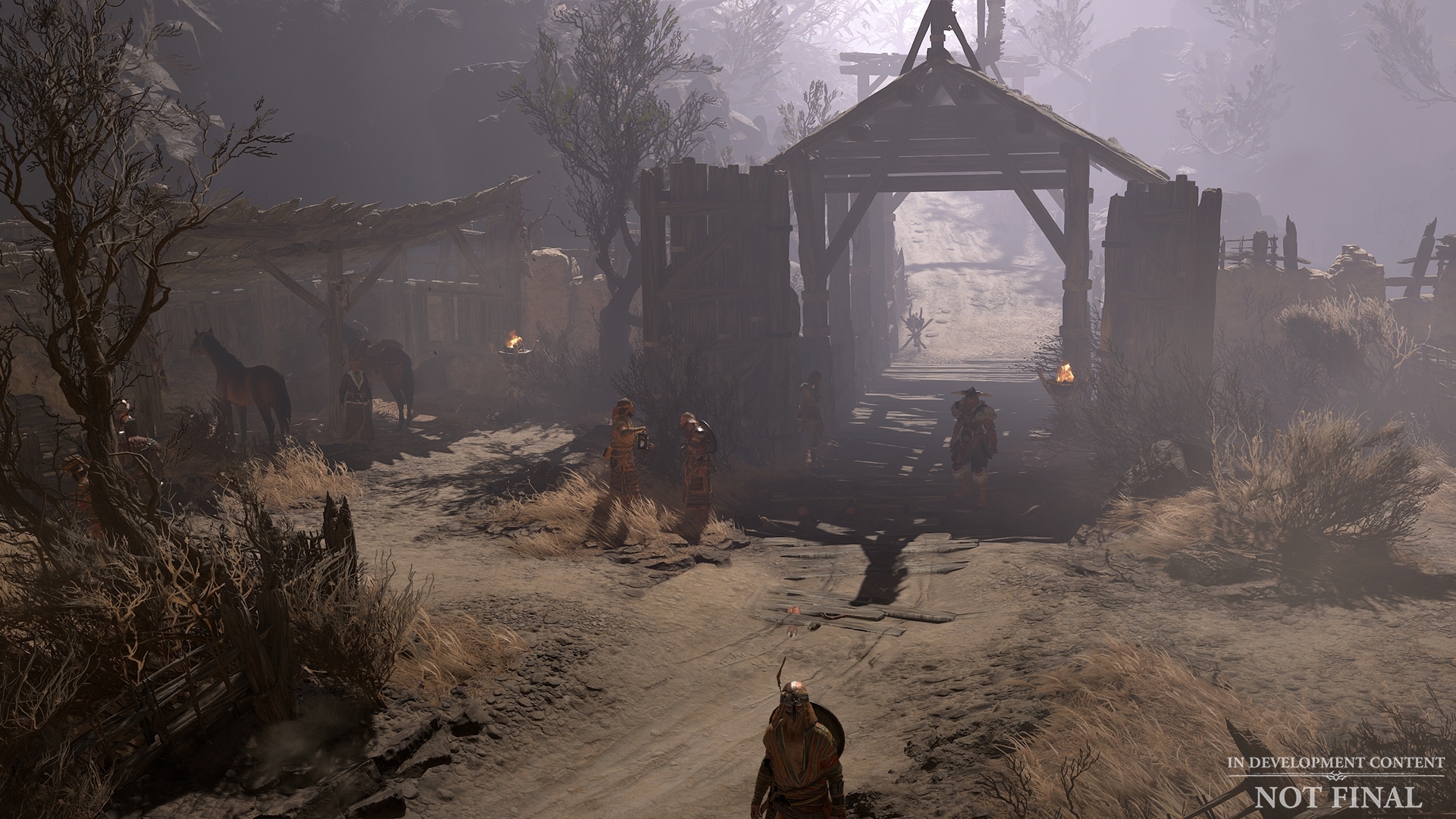 At the heart of Diablo IV is player choice. There is no one singular way to play the game; players will carve their own path forward, shaping their destiny in a nonlinear way of their choosing. This ethos extends to character customization, player skills, exploration of Diablo IV’s shared open world, its social systems, and of course—the end game. Let’s dive into these gameplay systems and some of the choices they provide. 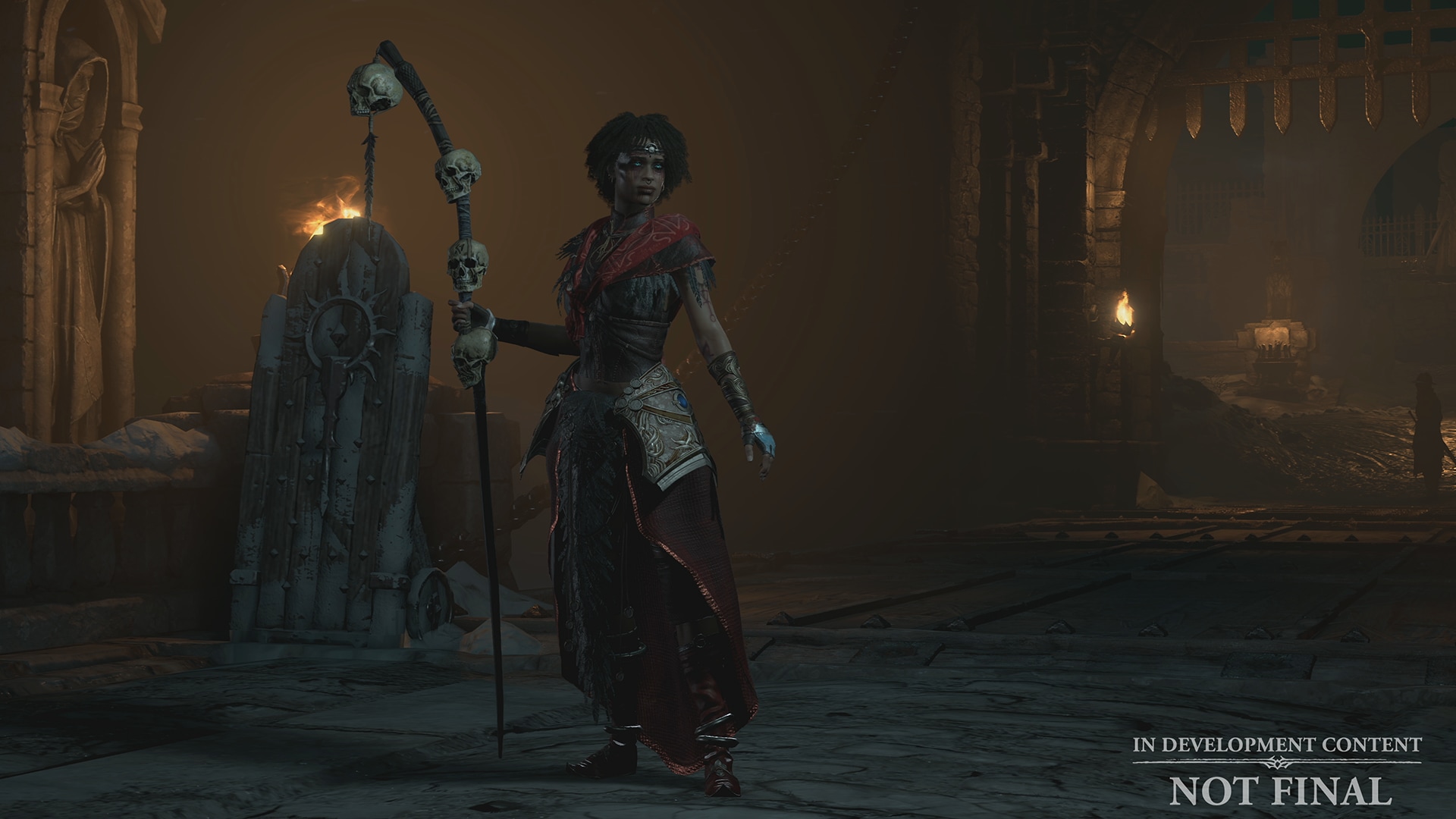 The denizens of Sanctuary are a diverse people. We wanted this same diversity to be reflected in the hero YOU bring to life. And thus, whether you set off into Diablo IV as a Barbarian, Druid, Necromancer, Rogue, or Sorceress, you’ll be greeted by a fleshed-out character customizer offering a plethora of options. This level of player choice doesn’t just reside in aesthetics, it is also seen in the expansive Skill Trees for every class, each offering endless ways to rip through the Burning Hell’s forces with your hero. 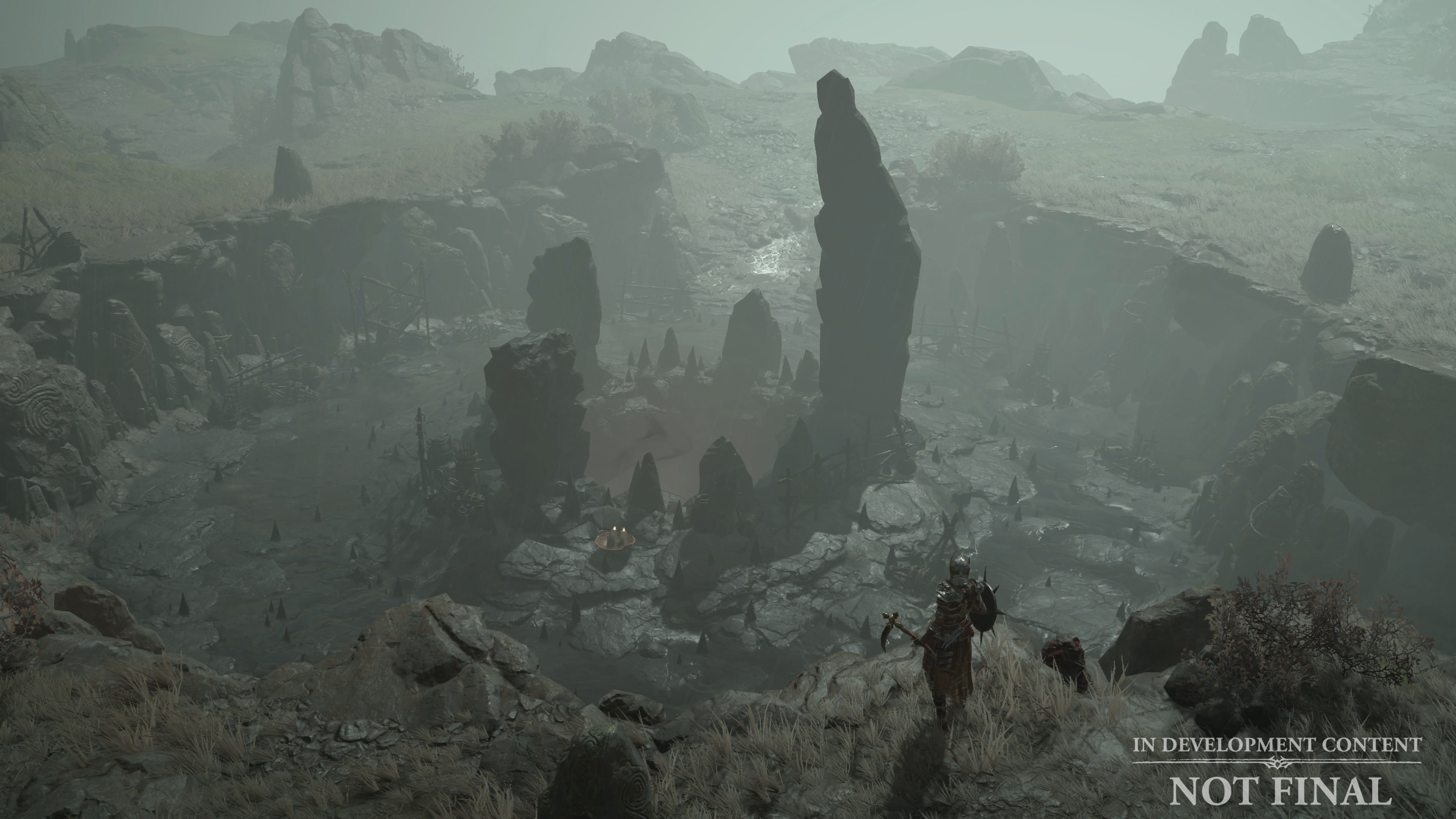 As we said, there is no singular way to traverse Sanctuary in Diablo IV—we leave that up to your motivations. The world is vast in scale; home to frigid mountain ranges, sand-swept canyons, plague lands bubbling with pestilence, and many other biomes. All with no shortage of demonic dangers to encounter and secrets to uncover. You won’t simply traverse through an empty world in Diablo IV—every inch is built for combat.

As you navigate around, taking notice of the wounds Lilith’s return has inflicted upon the land, you’ll encounter a new type of evil: Strongholds. These are locations the Burning Hell’s minions have claimed for themselves, casting a shadow of darkness upon them for you to lift. Clearing out Strongholds will bring about permanent change to these locations, repopulating them with non-demonic life and rewarding you with loot. Clearing a Stronghold may also reveal new dungeons to delve into and other hidden experiences. Speaking of dungeons, Diablo IV contains almost 150 detailed dungeons—close-quarters experiences for you to root out evil throughout the main questline and beyond. Each time you step foot into a dungeon, its layout and distribution of adversaries will vary, keeping the challenge alive while still allowing you to strategize a way to overcome the dangers within.

Sanctuary is alive…with demons to dispose of! Aside from dangerous dungeons and heavily defended Strongholds, there are also local events to be completed solo or with a team in the name of glory and rewards. And for daring heroes craving an especially hardy challenge, towering world bosses roam the world with a desire to end those who oppose them. Band together with fellow defenders of Sanctuary to topple these nightmarish titans. 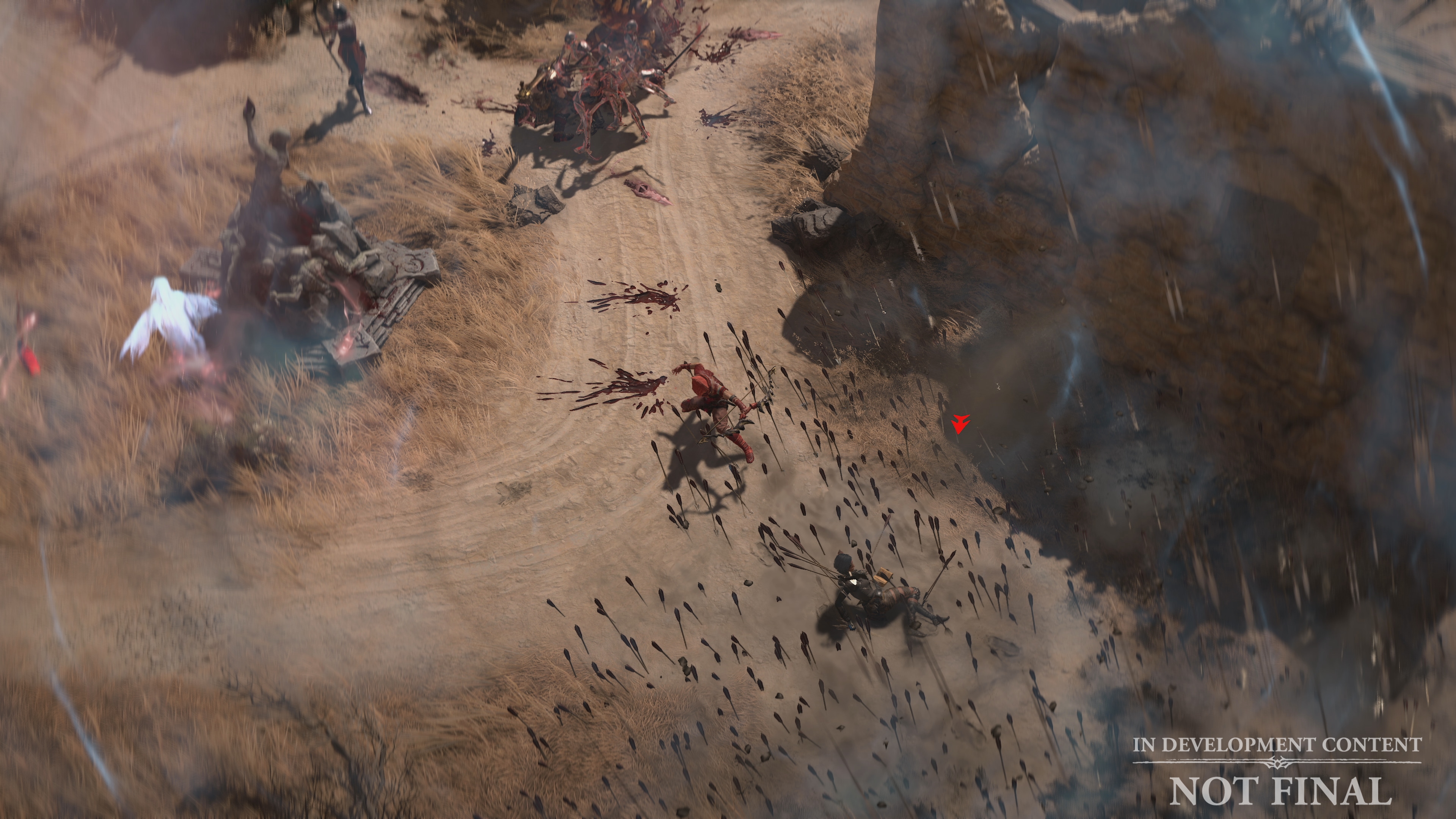 Teaming up with other heroes to rid Sanctuary of bloodthirsty demons or going head-to-head against them in combat has long been a staple of the Diablo experience. Diablo IV will continue this tradition by offering both fulfilling PvE and PvP experiences. Providing players with the option to pursue Lilith on their own or with the aid of others is just another way players have additional agency when playing Diablo IV.

To make demon slaying with friends a breeze, we have rebuilt the party-forming experience so that regardless of character levels or where you may be within a particular questline, you can still band together. This is also our intended experience for players on different platforms looking to cleanse Sanctuary of evil together.

But if vanquishing hordes of demons with other players is not your preference, you may prefer a more mortal opponent. Mephisto, the Lord of Hatred, forever looking to instigate a skirmish, has cursed specific areas of Sanctuary, transforming them into Fields of Hatred. Here, his influence pits mortal versus mortal in designated PvP Zones. If you give into Mephisto’s temptation by marking yourself hostile, you open yourself up to facing the full fury of others who are marked hostile, but should you be successful in striking down your opponent, their spoils shall be yours to claim. These zones are not for the faint of heart, rather for heroes looking to bring renown to their name through blood and zeal! 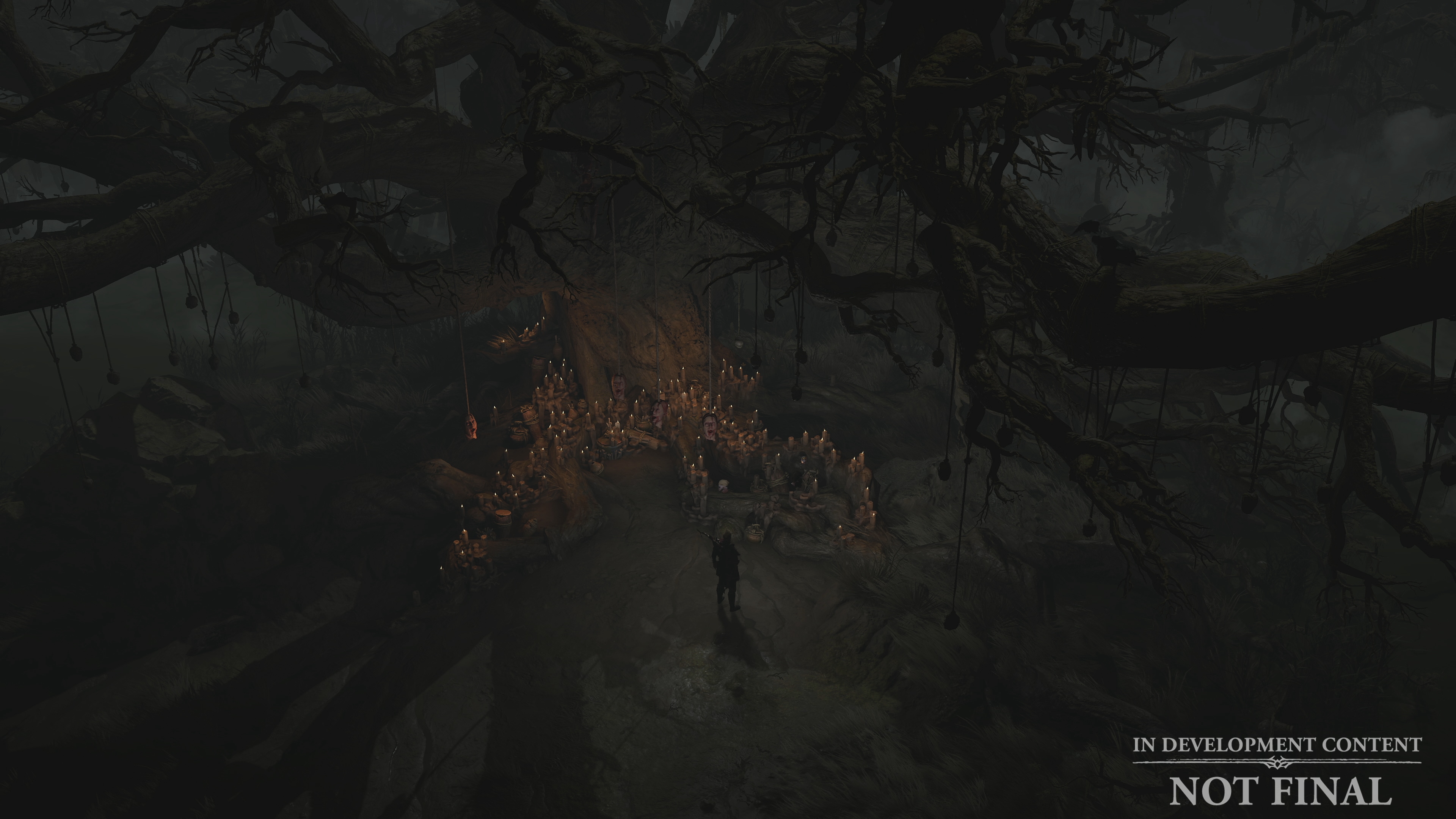 Closing the final chapter of Diablo IV’s main story will be a monumental moment, but it will certainly not signify the end of your hero’s journey. We want players to see the end game of Diablo IV as a new beginning filled with quite a few decisions ahead on what to experience next. First, you might try to take on Nightmare Dungeons: transformed and teeming with enhanced demonic dangers and added difficulty in the form of new objectives and added afflictions to the dungeon. Perhaps you want to branch off into another direction, say, place down roots for your future. Look no further than the Tree of Whispers, an end-game system that will provide you with frequently cycling world objectives and bounties that reward you with Legendary gear, experience, crafting materials, and more!

In Sanctuary, there is unrelenting ever-present danger waiting for you at every turn. To best whatever the Burning Hells may throw your way, you must grow stronger. Once you reach max level, the Paragon Board will unlock, and with it, hundreds of optional paths to further customize your hero’s build.

We thank you for joining us around the campfire to learn more about what is coming in Diablo IV! As we march forward to our 2023 launch, additional parcels of information will manifest from the darkness. Keep an eye out for future Quarterly Update blogs and more.

In addition to Windows® PC, Xbox One, and PlayStation®4, Diablo IV will come to Xbox Series X|S and PlayStation®5, with cross-play and cross-progression for all platforms

IRVINE, Calif.--(BUSINESS WIRE)--Jun. 12, 2022-- Blizzard Entertainment announced today that Diablo® IV, the next generation installment in the genre-defining series, is debuting in 2023. Blizzard also announced that Diablo IV is coming to Xbox Series X|S and PlayStation®5, alongside versions for Windows® PC, Xbox One, and PlayStation®4, with cross-play and cross-progression enabled for all platforms.

Inside Sanctuary—a realm long embattled by the devastating wars between the High Heavens and the Burning Hells—decades have passed since the events of Diablo III: Reaper of Souls®, but the world remains plagued by a sinister, corrupting force. And now Lilith, the Daughter of Hatred, has been reborn in the mortal world and is determined to rule over Sanctuary once more.

Joining the battle alongside iconic classes Barbarian, Sorceress, Rogue, and Druid is the legendary Necromancer, the fifth playable character class, which returns with newly designed undead mechanics. Players will be able to utilize the Necromancer’s Book of the Dead, an all-new ability for the class, allowing them to dominate the battlefield with deeper customization of their undead army than ever before. Fight with aggressive skeleton Warriors, fast-attacking Skirmishers, sword and board Defenders, or scythe-wielding Reapers. Unleash a litany of spells with Skeleton Mages, imbuing them with shadow, cold, and sacrificial magics. Deploy tanking Bone Golems, health-stealing Blood Golems, and charging Iron Golems. Or sacrifice them all to absorb their power.

“We can’t wait to open the gates of Hell next year—the talented team behind Diablo IV puts gameplay first in everything they do, and they have built the biggest and most ambitious vision of Sanctuary yet,” said Mike Ybarra, president of Blizzard Entertainment. “This sprawling world draws deeply from the dark well of the franchise’s 25-year history and is designed around the philosophy of player choice, offering an adventure unlike anything Diablo players have experienced before.”

Diablo IV’s version of Sanctuary is massive, and every inch is rife with opportunity for adventure. Character customization in the game is richer and more extensive than ever, and players will be able to let their curiosity (and perhaps foolishness) guide them through over 140 dungeons and dozens of side quests in their pursuit of victory over Lilith’s forces . . . and ever-more-powerful gear. Mighty world bosses pose added challenge throughout Sanctuary, encouraging players to team up with others they encounter on their journeys to defeat them and reap their treasures. And for the first time, players can forever alter the world around them by conquering and converting corrupted Strongholds into friendly outposts.

There’s no golden path to follow in Diablo IV; players can choose to progress in whatever nonlinear way they want to. This open-ended experience extends to the end game, where players can test their skills in Nightmare Dungeons, enjoy combative mayhem in dedicated PvP zones, build Paragon Boards to continue advancing and customizing their characters beyond max level, and engage with the Tree of Whispers to unlock further world objectives and bounties and acquire Legendary gear.

Those willing to rise to the challenge are encouraged to learn more at https://diablo4.blizzard.com, where further details about the game will be shared as development progresses.

For screenshots, video, and other assets, visit the Blizzard Entertainment press site at http://blizzard.gamespress.com.