There have been a handful of apparent leaks over the last few weeks regarding upcoming Diablo related announcements at BlizzCon this year. We advise taking all of these leaks with a grain of salt, and the credibility of any leaks should always remain in question. Generally speaking, unless it's a leaked trailer or a retailer releasing a pre-order page for a game early--as was the case in the early leak of Rage 2 from Walmart Canada--then it's rather easy to make to make a potential leak appear real.

We reported last week that there was a potential leak regarding Diablo: Immortal releasing on October 25th, just one week from the start of BlizzCon. This leak came from the Chinese website d.163.com, but many have called into question the credibility of this leak. Logically speaking, an early release date may make sense if Blizzard planned to avoid talking about Immortal during BlizzCon; however, many fans feel that it would not be wise to do anything with Immortal until after the next major Diablo game has been announced.

There is an ad for The Art of Diablo in a German gaming magazine that mentions the art book features "over 500 artworks from Diablo, Diablo II, Diablo III and Diablo IV." As you can see in the image below, the ad does appear to be a real listing from Blizzard; however, there have been no other images of this ad posted since the initial leak. Additionally, even if the ad were real, it's possible that the person who put the ad together meant Diablo: Immortal. 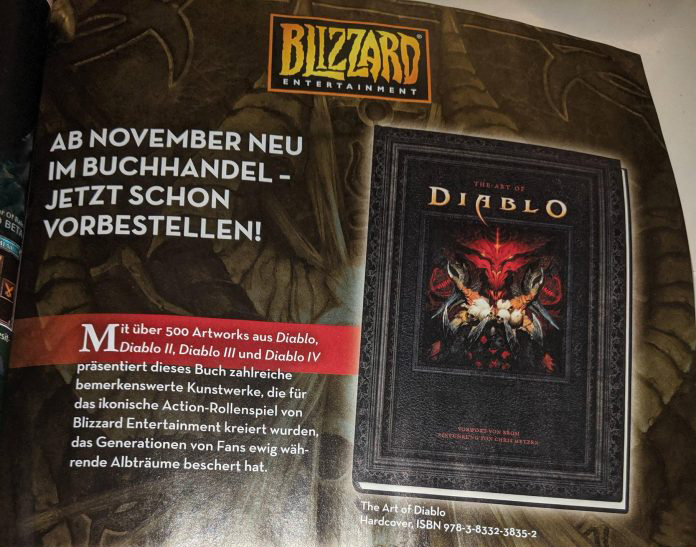 This final leak comes from Metro_OW on Twitter, who mentioned that Diablo IV and Diablo 2: Remastered will be among the announcements at this year's BlizzCon. We normally wouldn't place any credibility on leaks of this kind; however, Metro_OW did accurately leak the Ashe and B.O.B. announcement ahead of BlizzCon last year.

For anyone who cares, diablo 4 and diablo 2 remastered will also be announced.

As mentioned above, continue to take all leaks with a grain of salt, but there certainly is a lot of evidence for a Diablo IV announcement during BlizzCon this year. Let us know in the comments what you think of these potential leaks!