With Imperius recently entering the Nexus we thought it would be the perfect opportunity to dive into the history of the one the more adversarial members of the Angiris Council. Here's what we know about the Archangel of Valor. 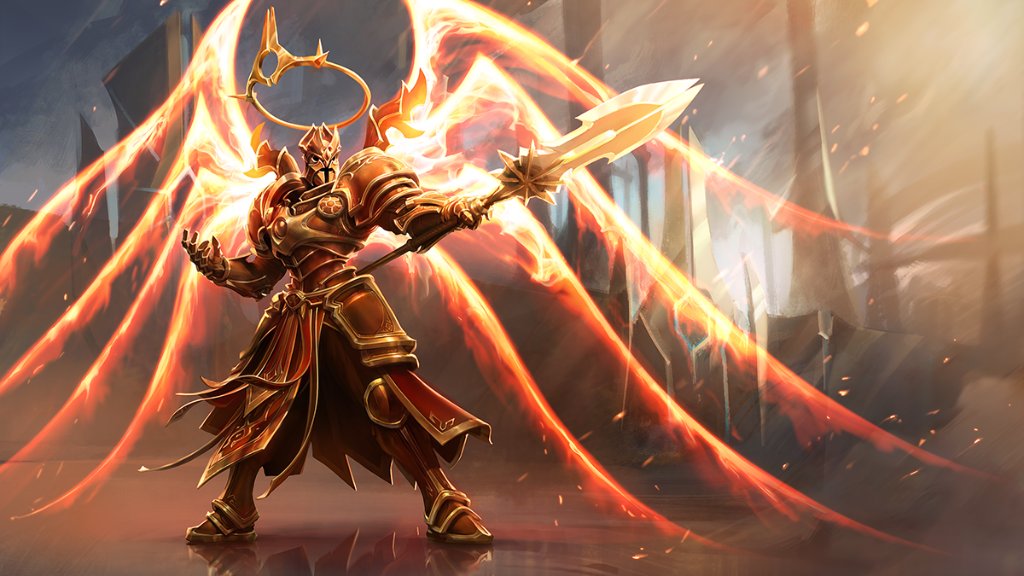 The Archangel of Valor & Wrath

Like the other Archangels of the Angiris Council, Imperius embodies an aspect of creation that defines the Heavenly Host, in this case valor. As the aspect of Valor on the Council, Imperius is a brave, if not zealous, fighter and defender of the High Heavens. He approaches all things with a military leaning, from the order he keeps within his realm, the Halls of Valor, to his combative personality, and his rigid, unquestioning loyalty to the Angiris Council and the Heavens they rule. Imperius is one of the greatest warriors in all of Creation and leads Heaven's armies in battle from the forefront, often times to an almost reckless extent. It would be hard for any being in Creation to match Imperius' lust for battle, as he is always the first to lead a charge in the defense of the Diamond Gates  at Heaven's doorstep, and he would also be the first to turn an advantage in the Eternal Conflict into an excuse to lead an attack into the depths of the Burning Hells. This yearning for battle was turned against Imperius at one point before the creation of Sanctuary.

It was during a battle in Pandemonium that Diablo was able to bait Imperius into a trap. Diablo had the demons under his command retreat,knowing that Imperius would follow blindly. Diablo trapped Imperius and taunted him, saying that Imperius' "valor" was little more than "rage" and that the Archangel was just afraid to show his true nature to the other angels. Diablo's ploy worked, and an enraged Imperius continue to lash out at the Prime Evil. Imperius was almost bested by Diablo in single combat, but the timely intervention of the other Archangels saved him. With Diablo defeated the Council voted to keep the Lord of Terror alive, knowing that if Diablo was slain he'd eventually resurrect again, but if imprisoned he could be held indefinitely and truly turn the tides of battle in the Eternal Conflict. Letting his anger get the best of him, Imperius brazenly went against the Council's wished and slew Diablo. With one last breath Diablo taunted Imperius a final time stating that the trap had been sprung, as one of the signs of the End of Days had been fulfilled — "Valor shall turn to Wrath."

After Inarius and Lilith stole the Worldstone and created Sanctuary, the Eternal Conflict eventually found its way to this safe haven during the Sin War. Imperius saw the budding power of the Nephalem as a threat and demanded a vote of the Council to determine their action. He voted to destroy the nascent human race and their world. Imperius was counting on Auriel and Itherial to vote to save the humans, Malthael to abstain, and Tyrael, his brother-in-arms to vote with him, a stalemate that would eventually end in the destruction of Sanctuary in order to keep it from falling into the hands of the Burning Hells. Imperius was the most shocked on the Council when Tyrael voted to save Sanctuary and humanity instead. This began a schism between the two brothers that would never fully heal. In the years since the Sin War, Imperius has argued against what he views as the Council's inaction to properly deal with the Nephalem and has continued to call for the destruction of Sanctuary. However, he has kept his rage in check and continues to abide by the Council's ruling of non-interference in the development of humans.

The Coming of the Prime Evil & Death

After completing the Black Soulstone, Diablo would again face Imperius in single combat, this time with the full might of all of the Seven Evils as the Prime Evil. Diablo would make short work of Imperius and move on to bring about the destruction of the High Heavens. Imperius would begin to lead the defense of Heaven, despite his recent injuries, in an attempt to fight back the forces of Hell that were overrunning the angelic defenders. Imperius, yet again giving into his anger, was enraged by the presence of the Nephalem hero that had been chasing Diablo through Heaven. At the Crystal Arch, Imperius threatened to destroy the hero before he would take on Diablo again, but his challenge was cut short when the Prime Evil began to corrupt the Crystal Arch and incapacitated the entirety of the Heavenly Hosts in the process. Despite the Nephalem's triumphant victory over the Prime Evil, Imperius still held the hero and the rest of humanity in little regard.

It was only when Malthael turned on his angelic brothers and sisters and attacked Heaven in an attempt to seal the portals to Pandemonium that Imperius begrudgingly agreed to help the Nephalem stop the Angel of Death. Imperius helped the Nephalem fight against hordes of demons and ancient seals that we barring the path the Pandemonium Fortress that Malthael was hiding in. Imperius was there to witness the Nephalem stand against and defeated Malthael and watched silently as Tyrael pondered the power and nature of the near godlike Nephalem.

The Future of Valor

If Tyrael can question the motivations of the Nephalem after witnessing Death's fall, what would Imperius say? Now that there are only three members left on the Angiris Council and Imperius is still acting as leader, he holds more sway than ever and trying to change the Council's vote on the future of Sanctuary.  We know nothing of how the Archangels might elect a new member to the Council, but it is highly likely that many other angels hold his view on the Nephalem. If not viewing humanity as a scourge upon Creation, no one in the High Heavens could doubt that reality of the threat that humans represent. The angels were lucky that the Nephalem hero was on their side, but it easily could have been someone like Zoltun Kulle that had unlocked such tremendous power and just as quickly waged war on Heaven as they did Hell.

Imperius' silence during the death of his brother, Malthael, could also represent a change taking place in him. Tyrael originally thought to destroy humanity when he first encountered them, but was swayed from his opinion upon seeing their potential for good. Imperius could have seen the fall of Malthael into madness as a sign that even the angels themselves are not exempt from temptation, especially given Imperius' incident where he let his own anger get the better of him and defied the Council. While likely still not to be friendly towards humanity, Imperius could begin to come around to seeing their potential and help to guide their further development into Nephalem for the forces of Order and the Light. Whatever Imperius may feel, none can deny that the scope of the Eternal Conflict has changed. Sanctuary and its inhabitants are now, more than ever before, an important part of the eternal power struggle between Heaven and Hell.

The future has yet to be told and the threat of the End of Days still looms large over Creation. How do you think Imperius will react to the new danger facing Heaven and the new power dynamics of the Eternal Conflict?