From Heaven to Hell the Diablo series has taken us to many fantastic places across the world of Sanctuary, but in a setting as deep as Diablo we've barely scratched the surface. We've scoured through dusty maps and tomes of forgotten lore to find some of the most interesting locales we've yet to visit in game. 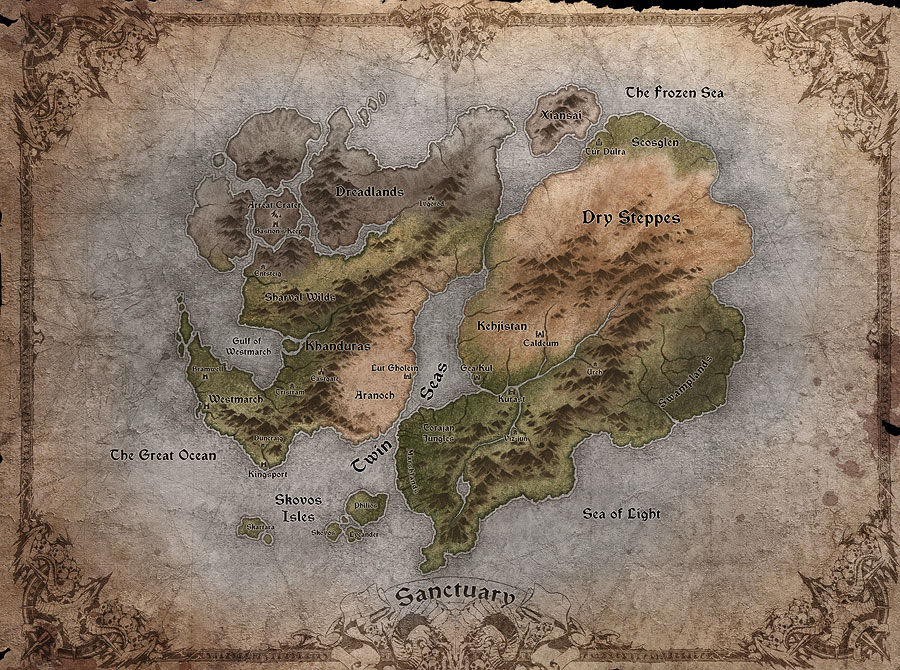 Whereas Westmarch fills the role of the pinnacle of a civilized medieval city, Kingsport is it's shady counterpart. Located south of Westmarch and Khanduras, Kingsport is a city full of merchant and thieves guilds and can be a very dangerous place for those not privileged enough to escape it's slums. Kingsport was the home to both Adria and Lyndon. The Nephalem would briefly visit Kingsport during the events of the Reaper of Souls in a failed attempt to save the life of Lyndon's brother, Edlin. Edlin had been murdered by his own wife, Rea, who left a taunting note daring Lyndon to come back and find her if he wanted revenge. What adventurer wouldn't love the chance to visit Kingsport proper? Heroes have visited tiny villages, ruined fortresses, and majestic cities in Diablo, but never have we had the chance to dig into the slums of a crime infested urban sprawl. In Kingsport, adventurers would have plenty to see and do; find redemption (or revenge) for Lyndon, dig deeper into Adria's past before she fell to the dark powers, and maybe even bust up a crime syndicate or two.

Gea Kul was a quiet fishing village on the coast of Kehjistan near Kurast. We visit there briefly during the events of the novel Legacy of Blood, but we come to know the true nature of the city in the The Order. In times past, Gea Kul was the site of another city, Al Cut, and was the center of a massive battle during the Mage Clan Wars where many powerful mages died and were entombed, along with the entire city, beneath the earth. The area would later be resettled as Gea Kul and it's history forgotten in all but a few ancient tomes kept by the Horadrim.

After the fall of Kurast, Gea Kul would suffer a similar fate to Tristam and be taken over by a powerful sorcerer, Garreth Rau, who was in service to Belial. The Lord of Lies wanted to resurrect the magi of the dead city as an unstoppable army of over a thousand undead mages. Gea Kul was purged and most of the inhabitants were corrupted and turned into undead or demonically possessed servants of Garreth in his quest to raise the souls buried in Al Cut. Garreth and Belial's plans were foiled by Deckard Cain and a newly reformed Horadric Order who collapsed the cave containing Al Cut and flooded it with the sea before the events of Diablo III. But was all of Al Cut truly destroyed? Who knows what could still be lurking in the hidden depths below the remains of Gea Kul?

Ureh was a grand and refined city in the mountains that bordered to the east (always to the east) of what is present day Kehjistan. It was one of, if not the, most righteous bastions of order on Sanctuary and earned the ire of Diablo during the Sin War. The leader of the city, Juris Khan, was tricked by the Lord of Terror and enacted a ritual that was meant to shift the city into the realm of Heaven, but while in actuality the ritual would send the city to Hell and open a permanent gateway that the forces of evil could use to assault Sanctuary. Archmage Gregus Mazi had discovered Diablo's secret, but was unable to convince the now corrupted rulers to stop the ritual. Gregus was able to alter the ritual and the inhabitants of the city were sent into a limbo between Heaven and Hell and the once great city of Ureh became nothing more than a hollow ruin.

Accounts of the time frame differ, but once every eon the souls of the lost city return to Sanctuary and Ureh comes alive once more, but in a dark, twisted parody of itself. Having been corrupted by the forces of Hell, the inhabitants of Ureh were turned into near mindless undead bound to the will of Juris Khan. Diablo's plan was finally put to rest when the mercenary Kentril and the Necromancer Zayl destroyed the Keys of Light and Shadow that would permanently open the gate to Hell. Even with the Keys destroyed the shade of Ureh could still make it's way back to the mortal realm. Could there be secrets there of the machinations of the Prime Evils? Lost treasures? Or just another corrupted locale of Sanctuary needing to be cleansed?

Of the sites of ancient battles of the Mage Clan Wars, none were as violent or as bloody as Viz-jun. Viz-jun was once the capital of the Mage Clans' empire in the southern jungles of what is now Kehjistan and one of the most powerful cities to ever exist in Sanctuary. During the Clan Wars, the Vizjerei were on the brink of defeat from the combined might of the other clans, but in a last bid for survival the beleaguered clan broke all taboos and summoned an army of demons to aid them. The Vizjerei turned the tables on their foes and pushed the rival clans all the way back to the gates of Viz-jun, but it was here they were betrayed by Bartuc, who had been completely corrupted by demonic influences. The Vizjerei forces turned on one another in a civil war while the rest of the city could do nothing more than watch on in horror.

The only person that could challenge Bartuc was his brother, Horazon. While Horazon would emerge the victor, the cost was great. So terrible were the forces unleashed by the brothers that tens of thousands died and it left the once might city of Viz-jun nothing more than a smoldering ruin. Since the events of the Mage Clan Wars, Viz-jun has been abandoned and the area is infested by the lingering demonic essence of the countless legions of Hell that were summoned and the souls of the thousands of mages and civilians that died there. What treasures of the ancient Mage Clans might still lay hidden in the ruins of the once great city? And what horrors may still guard them?

Skovos is the island home to the Amazons, the martial order of the Askari people. In the southern part of the Twin Seas on the border of the Great Ocean, the Skovos Isles are secluded from the rest of the world and have developed their own unique culture and traditions. As befitting of there island nation, Skovos controls a vast fleet of merchant vessels that travel the globes and tales of the battle acumen of the Amazon warriors that guard these ships are known in every corner of the world. Despite their prominence in the trade markets of Sanctuary, the nation of Skovos itself is secluded and the Askari are very secretive of their home. While the nation has many port towns, little know of the jungle cities of the islands. The jungles of Skovos are so dense that the Askari have constructed arboreal cities above the ground in the trees. It is said to be a true wonder to behold the streets and buildings that rest upon the thick boughs of the jungle trees.

The jungle floors of Skovos are shrouded in complete darkness and are full of dangerous beasts. Even the flora of Skovos is deadly, with toxic plants ready to lure the unprepared to their deaths. Skovos is a land of untamed wilderness and is very different from many of the other places of intrigue in Sanctuary. There are few tales of demonic influence in the Isles, but maybe that is just because even demons are hesitant to step foot into the wilds of Skovos.