League of Explorers Will be Rotated in 2017 - Not 2018, Card Design Championships Voting

After quite a hiatus the Play Your Way blog returns! It focuses mostly on non standard builds by players who are meant for specific end-game tasks or are meant to be fun specs. Read it below.

You’ve heard of One Punch Monk—but now it’s time to deliver a swift boot to the head! In today’s build, Davlok#1847 props up Lashing Tail Kick as the star of this fiery flurry of kicks to debut the return of Play Your Way Thursday!

Be prepared for a bit of investment—Davlok’s One Kick Monk centers around the Legacy of Nightmares ring set, which means collecting a whole lot of Ancient items. Still, the results are an extremely satisfying line of combustion bursting from rapid-paced kicks that will melt just about anything encountered.

This is a great change of pace for fulfilling your basic tasks, like farming bounties and Torment X Nephalem Rifts. With the inclusion of Nemesis Bracers, it’s a particularly ideal method for gathering up Death’s Breath’s without resorting to the Sage’s Journey set while still feeling like a total martial arts badass.

Davlok was way luckier than I was while testing his build!

You will want to make a couple of tweaks for survivability if you intend to tackle higher-end Greater Rifts, however. Try changing Epiphany (Insight) to Epiphany (Desert Shroud) or working in Cyclone Strike withLefebrvre’s Soliloquy for that extra defense.

Here’s a closer look at this build in the skill calculator. 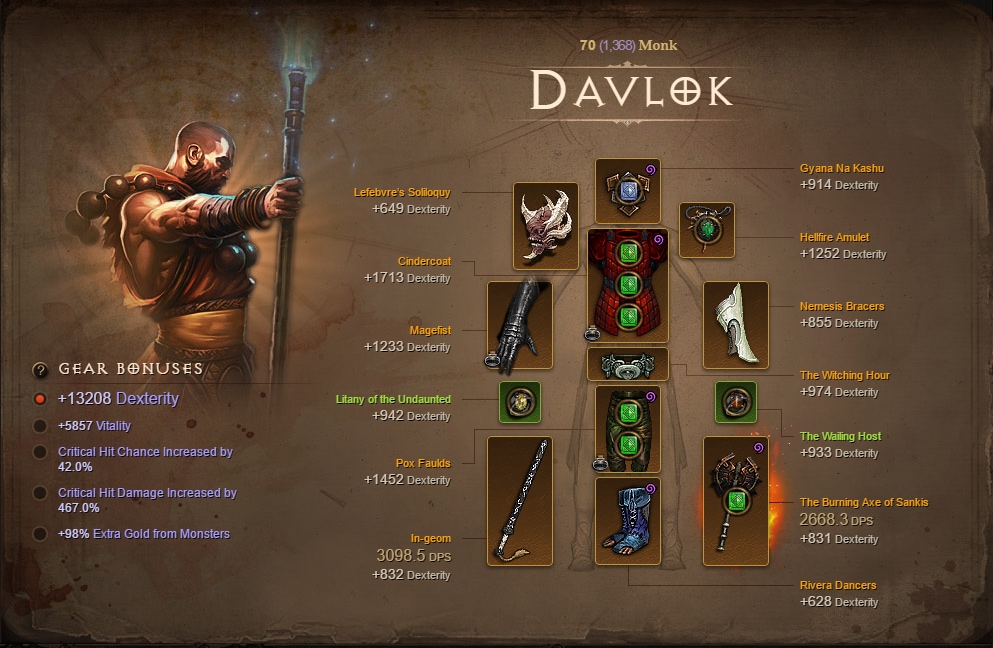 Tell Us What You Think!

Are you a fan of Lashing Tail Kick? Or do you just like raining fiery destruction onto your foes no matter the method? How do you think this build will perform with the new Lashing Tail Kick item, Scarbringer, on the 2.4.2 PTR?

Let us know in the comments and don’t forget to send in your build! We’re still gathering droves of entries, so gear up, load out, and share your latest Play Your Way discovery with the world. See you in Sanctuary!

Anthony Evans recently released a quick video guide going over the Greater Rift setup that he uses for his Templar. Very interesting video for those solo players who are trying to push their limits towards the end of the season - check it out!