A new PTR Patch has been datamined. Read all the class changes and its new strings, which contains changes to items and sets, below.

The following information is datamined and may be inaccurate! It is also likely to change before the patch goes live.

We will continue updating this post as we get more information. Check back often!

Below are all the changes to set bonuses coming in the PTR patch.

Thorns of the Invoker

Embodiment of the Marauder

Raiment of a Thousand Storms

Wrath of the Wastes

These are the new Pet and Wing icons found in the datamined files. The 3rd pet icon is called the Cow King pet in the string files. 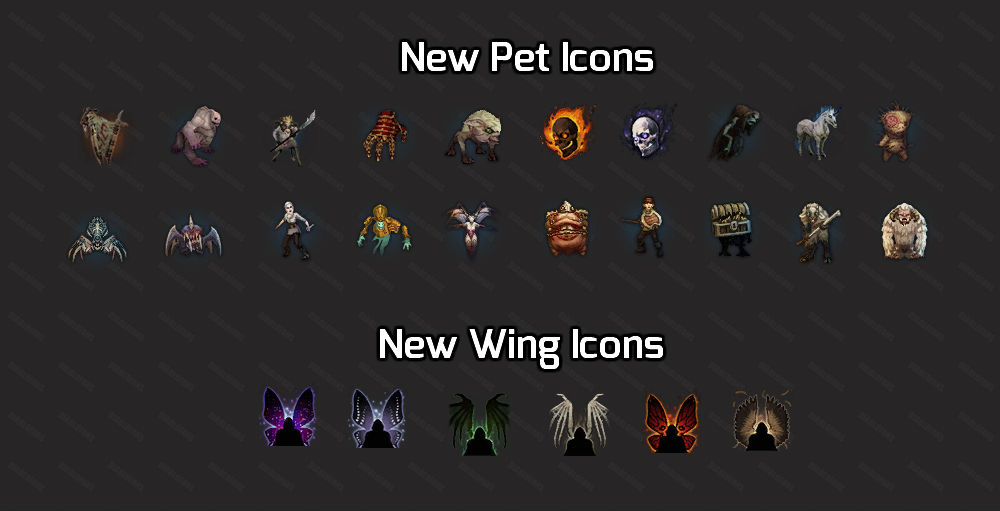 All the string changes in the latest PTR patch. This will be formatted into sections as we move forward.

>>> Note how it's usual for devs to put legendary or set affixes that are being tested or changed on "Rings". It does not mean these powers/affixes will be moved over to Rings!

Kauza on the PTR Patch

Kauza clarified a few facts about the next PTR patch being deployed in the near future. See the blue post below.

We’ve been hard at work on our next patch, which is going to bump us up to version 2.4.1. We’ll have our official PTR patch notes available soon, but we’d like to call out a few specific changes and talk about the philosophy that went into making them.

First, we’ve been looking at the prevalence of Barbarians in group play beyond Greater Rift 80 and how they’re being used. While many classes bring party-based buffs, the damage reduction of Ignore Pain – Mob Rule combined with Pride of Cassius is currently a clear outlier. As a result, we’re reducing the party benefit of Ignore Pain – Mob Rule from 50% to 25%. To ensure this doesn’t harm the overall viability of group play, we’re also reducing the damage of monsters at high Greater Rifts. This allows not only groups with Barbarians to remain near the same levels in terms of incoming damage, but it affords alternative group compositions greater survivability.

Next up, Wyatt had recently posted a bit about Taeguk. We are making some significant changes to Taeguk, as well as some other Legendary Gems.

First up, for Taeguk:


The idea here is that Taeguk will complement those moments when you’re channeling and need an extra boost. You probably won’t have Taeguk up all the time, but it won’t hurt as much when your stacks fall off as you’ll build them up much more quickly. And while the Armor % reduction will affect survivability, the reduced monster damage at higher Greater Rifts will help to balance this out. We’ll have much more to share soon on changes to other gems, which will help to make as many gems as possible work as reasonable substitutes for Taeguk.

Finally, we are changing both Twisted Sword and Solanium. What we’ve seen from group compositions is a playstyle based around Wizards spamming Energy Twister, while the group spams Health Globe generation. We’ve received a ton of feedback on these, and we agree completely that manipulation of the generation of health globes is not good for the game. Here’s what we’re changing:


This means a couple of things for users of these items. For Solanium users, you’ll still be able to generate additional health globes, but this removes any possibility of the current health globe spamming mechanics moving forward. For Twisted Sword users, Wizards who use the skill in the course of their normal playstyle shouldn’t see much of a change. However, the exponential scaling made possible by Energy Twister spamming won’t be possible anymore.

In short, you should be able to play support builds, and your Wizard should feel powerful. What we found with both of the above cases, though, is a negative effect on group dynamics and class playstyle. We’ll be taking all of your feedback during PTR to ensure we’ve hit our goals here. And, of course, thanks for all of your feedback on Patch 2.4.0.