A couple of minor hotfixes were deployed to Reaper of Souls, fixing a bug with the Wortham Survivors bounty and with some Hellfire Amulets. Read below.

PrvtPile has put together an interesting thread on our forums, suggesting some potential updates to improve the Paragon System - which is a very heated topic of discussion in the community. Below you can see a quick preview of it, but definitely take some time to check the full version!

What do you think of his proposed changes? Would you like to see them in a future patch? Feel free to leave your feedback there or in the comments!

Optimistic idea for a Paragon update

For a long time now players have recognised that the current paragon system not only has a few problems (the unlimited paragon grind incentivizes botting, for example), but is also pretty uninspiring (you fairly quickly reach the point where you simply max everything, and past 800 you simply add to mainstat). There have been many great ideas put forth by the community to address one or both of these issues, and here I’ve tried to collect a lot of those ideas and combine them together and present them in the form of some colourful pictures (everyone likes pictures).

This idea for a new paragon system has two main objectives:

different ways to customize their builds

Don’t worry too much about the particular values suggested for each of the stats – I won’t claim that they’re perfectly balanced, although I did spend a decent amount of time math’ing through them to attempt to balance them, but I could obviously be way off the mark on many of them. If you think any of the numbers are particularly off, throw your feedback this way.

Paragon is divided between ‘Core’ and ‘Bonus’. This simply divides your first 800 paragon levels (Core paragon) from anything above 800 (Bonus paragon).

There are 10 Stats per category.

Almost all Stats max out at 50 points per Stat (like the current system), with a few exceptions.

Why the paragon 800 threshold?

This deserves its own separate discussion, but as a basic summary: I feel the general consensus of the community is that there needs to be some ‘restrictions’ in place to curb the incentives for botting i.e. the infinite progression systems that are present in almost every aspect of this game only serve to enhance the benefit botting gives – and botting will never be got rid of (it exists in every game and always will), so one ‘solution’ (the only realistic solution) is to minimise the impact botting has, and minimise the incentives for botting.

So, there’s nothing special about 800 in particular, and the threshold could be set anywhere, but Paragon 800 should be an ‘achievable’ paragon level to reach for most people interested in the leaderboards. Now, what we can do is have some kind of ‘Competitive’ Rift system (which would be the only Rift system tied to leaderboards – there would be no more need to tie Leaderboards to GRifts, which is really getting more and more ridiculous as can be seen by having well-documented botters holding top places on the leaderboards). In this Competitive Rift system your paragon would be capped at this 800 threshold. Outside of this Competitive Rift system (i.e. everywhere we currently play: Adventure Mode, Rifts, Grifts, etc.) players could use their uncapped paragon points. Ideally (and now I’m really digressing here) these Competitive Rifts would not be exactly like current Greater Rifts, with their heavy dependence on RNG – however, that’s definitely a topic for another thread, and I’d settle for the Competitive Rifts being effectively identical to Greater Rifts, and see it as a move in the right direction.

(Another alternative could be simply to have Seasonal paragon cap at 800, while non-season has uncapped paragon.)

In the following images, this player has a Paragon level of 1123, and has currently applied only 200 points of their 800 Core points into the Offense tab, maxing that tab out.They have not placed any more points in any other tabs, leaving 600 Core points to distribute. The 323 (1123 - 323 = 800) Bonus points would not be able to be used while inside a Competitive Rift. 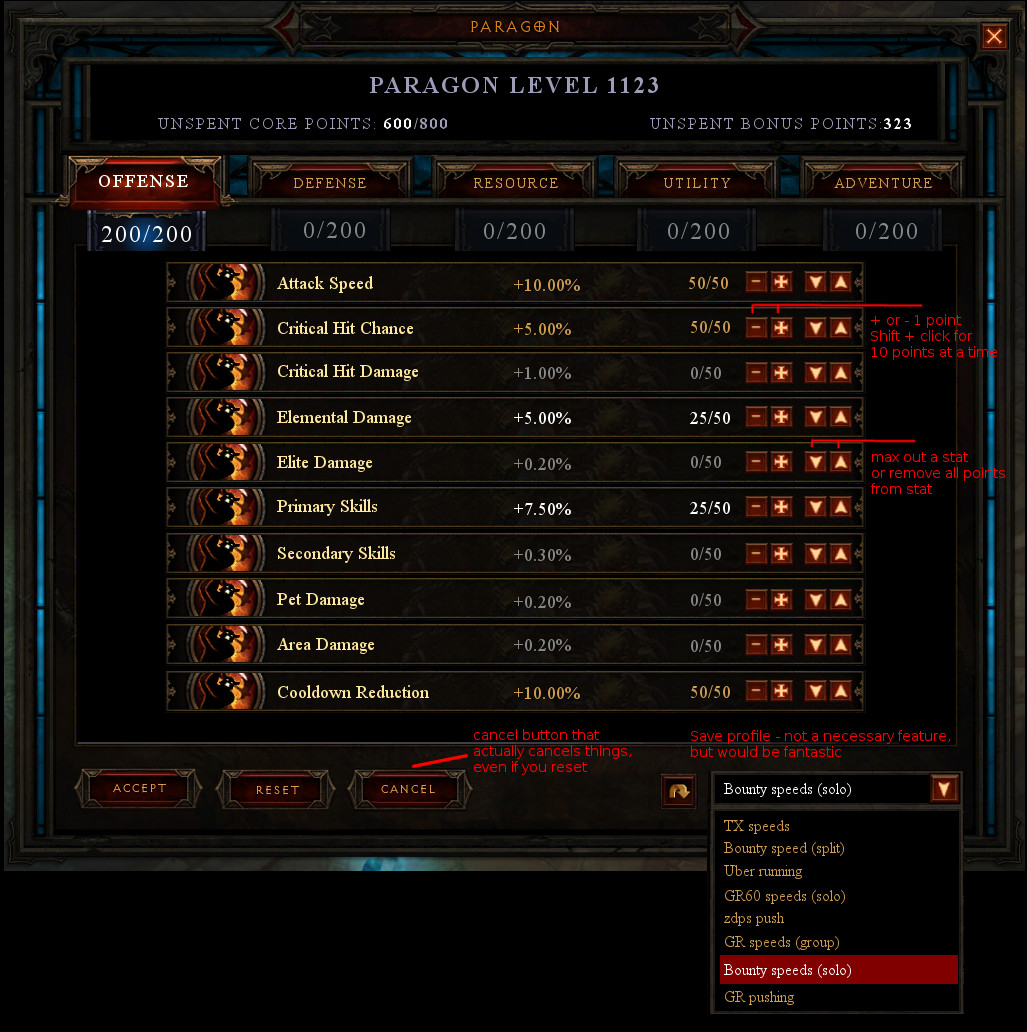