With the latest PTR patch released today the changelog has been updated with quite a few new items. The notes below contain all the documented changes from today's patch. Also note how the Mac version should be fixed now!

Below you'll find the preliminary PTR patch notes for patch 2.4.0. Please note that this isn't the final version of the patch notes and that some changes may not be documented or described in full detail.

Season 5 has now started on the Public Test Realm. If you're interested in testing this particular aspect of the new patch, give it a try. 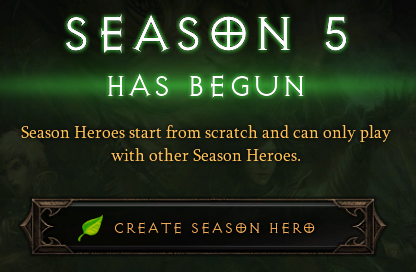 Diablo 2's ladder is being reset once again on November 24th, next Tuesday. If you still play the old Blizzard classic, see the post below for more details.

This ladder reset, like all those before it, creates a clean slate where all ladder characters begin at level 1 with no previous items to help them. To participate, simply wait until the Diablo II realms return to service on November 24, log in to Battle.net, and select the “Ladder Character” checkbox when creating a new character. You can track ladder character leveling progress by clicking on the Ladder button from the main Diablo II in-game Battle.net interface.

Rhykker is back to making video guides for Reaper of Souls, and one of the first he's done is on a hybrid Raekor + IK Barbarian on the PTR. Watch it below and let us know what you think!