It's almost here, nephalem! The first major content patch for Reaper of Souls™ is right around the corner and we're preparing a Public Test Region (PTR) to give you a hands-on look at the upcoming changes. In the meantime, let's get started with a high-level overview of what you can expect from patch 2.1.0.

Table of Contents: Please note that this is only a preview. The below information does not reflect all changes available in patch 2.1.0 and is subject to change. Some images represent works in progress, and may not be representative of the final product.

Similar to Ladders in Diablo® II, Seasons will offer players in Diablo® III a chance to periodically start fresh, leveling their level 1 characters and artisans from scratch. Season participation benefits include exclusive rewards and unique Legendaries as well as the the thrill of climbing all-new Leaderboards by completing achievements, earning Conquests, or running Greater Rifts. 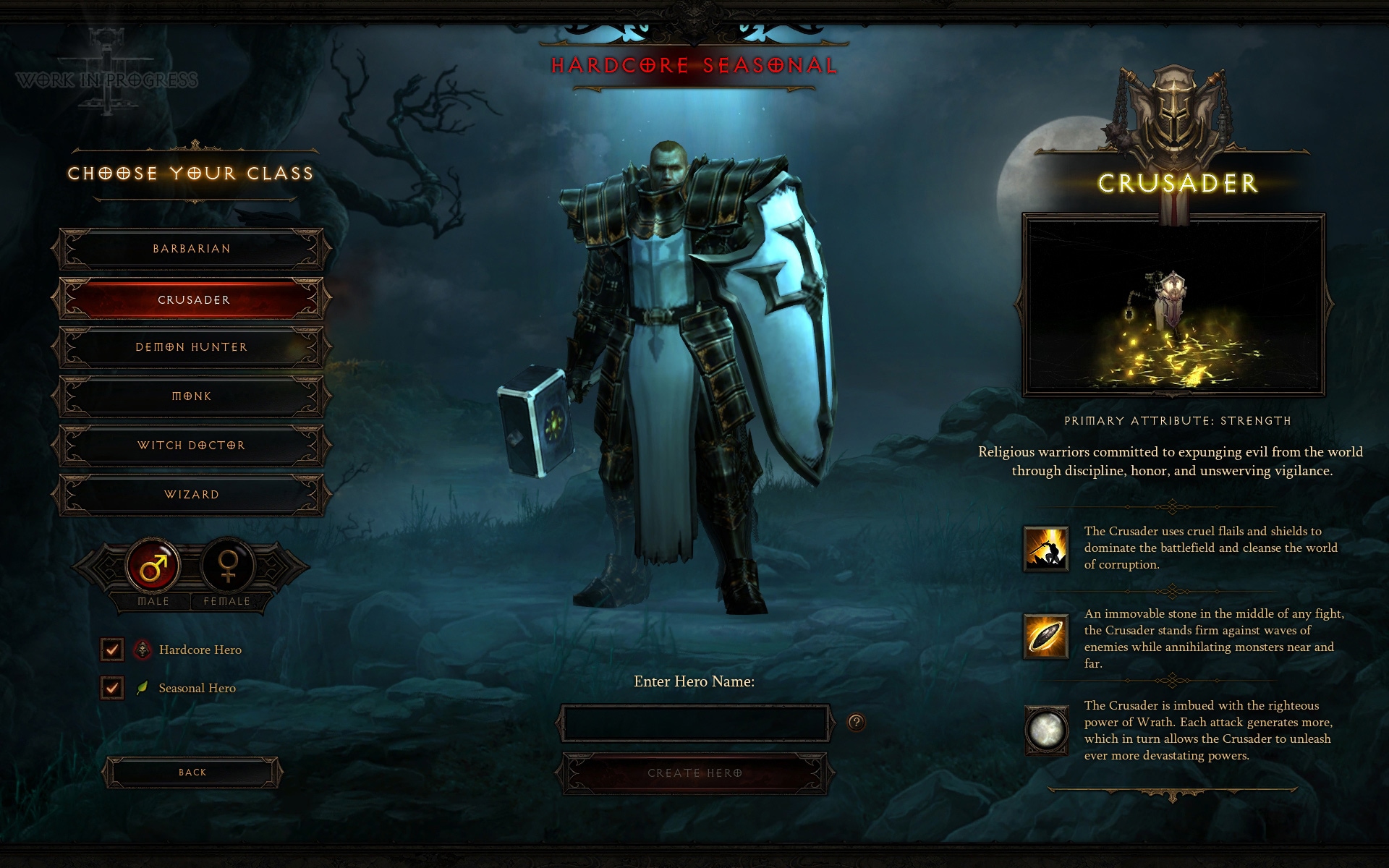 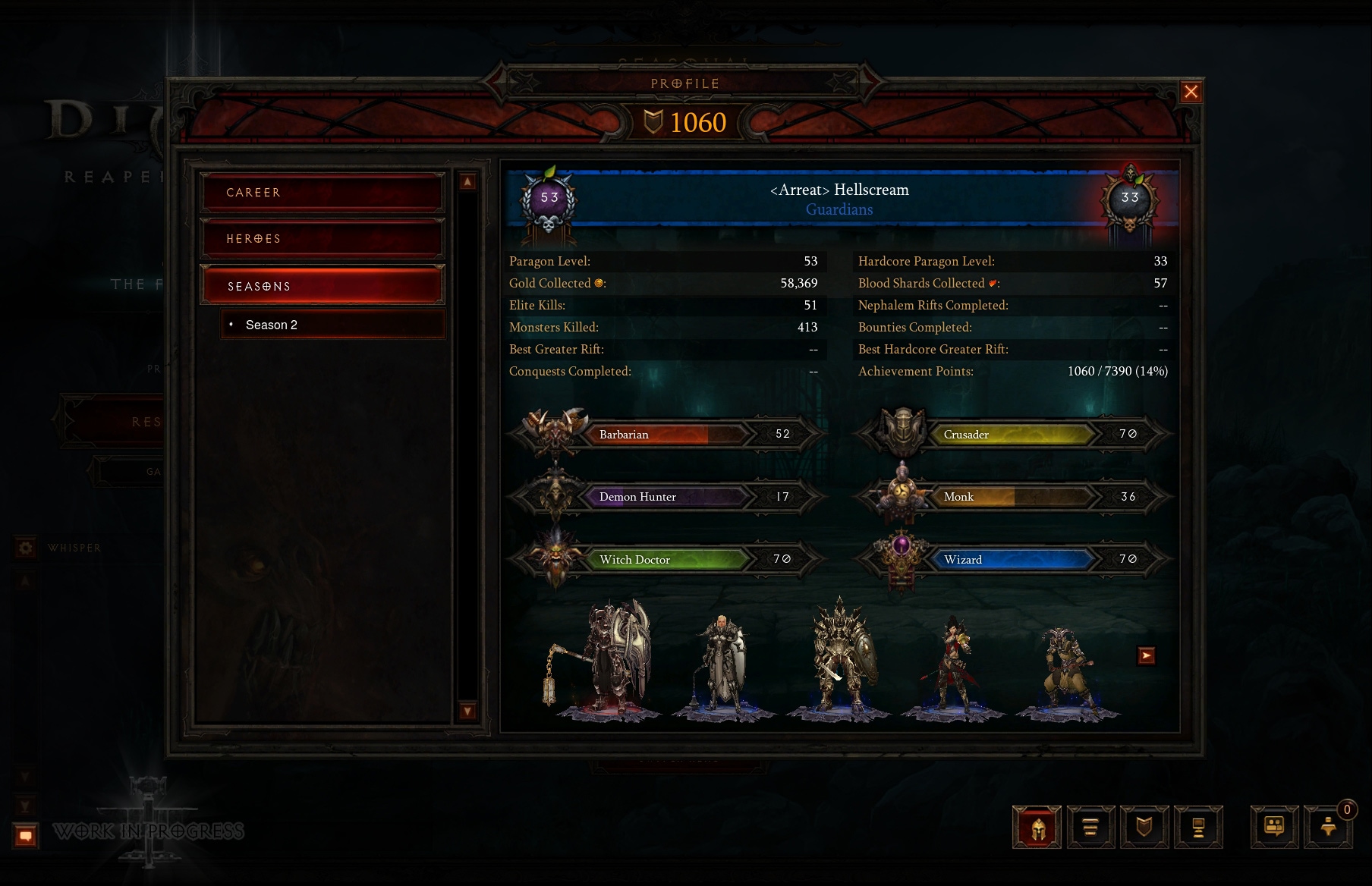 Left: A Seasonal Hardcore Crusader gets ready to hop into the action.
Right: A full overview of your Seasonal characters will be available in your Character Profile.

Conquests:
With the start of each Season, players will have the opportunity to earn Conquests. Conquests are special Season-only achievements (offered in addition to the suite of non-Seasonal achievements already available in the game) that represent a variety of challenging goals. These goals can vary in terms of gameplay and difficulty, and some might be easier to complete than others. With tasks ranging from killing Malthael at level 70 on Torment VI to finishing Acts I-V in an hour or less, Conquests are designed to encourage and promote an array of different playstyles.

Conquests are considered "first come, first served," and the first 1000 individuals to complete a Conquest within a given Season will be immortalized on that Season's regional Leaderboard. Right now, we're looking to provide between 10-15 unique Conquests each Season, and each Conquest will have its own Leaderboard. Conquests will also provide achievement points and will count toward your Seasonal point total. These points will be provided regardless of whether your character placed in the regional Leaderboard.

No Seasons? No Problem!
Not in the mood to start from scratch? You’ll still benefit from Seasons. New Seasonal Legendaries will roll over to non-Seasonal loot pool after a Season concludes. In addition, Greater Rift leaderboards will also become available to non-Seasonal characters, so you can compare the progress of your friends and clanmates with that of your most veteran heroes!

Formerly referred to as Tiered Rifts, Greater Rifts are a special type of Nephalem Rift that are designed to provide players way to measure their gear progression and efficiency.

How to Access Greater Rifts:
To access a Greater Rift, simply complete a regular Nephalem Rift in any difficulty. When you defeat the Rift Guardian, they'll have a chance to drop a Greater Rift Key. You can then use this new key at the Nephalem Obelisk, similar to other Rift Fragments—this will open a Greater Rift. If you have members in your party, each player will be prompted to use one of their own Greater Rift keys to join the fun! 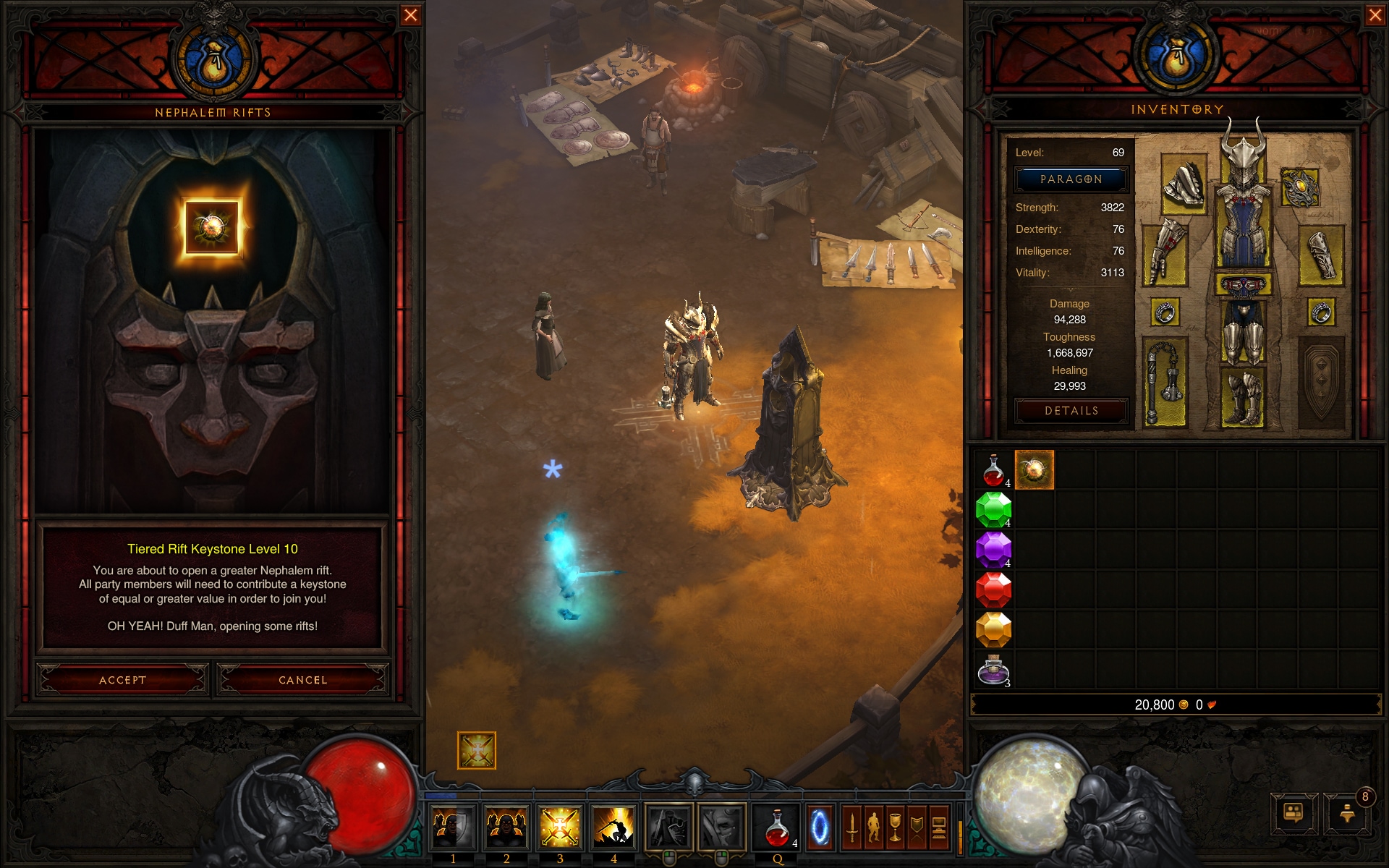 Entering a Greater Rift requires its own type of Rift Keys.

How Greater Rifts Work:
While Greater Rifts are a type of Nephalem Rift, there are some key differences between the two features. In Greater Rifts: If you complete a Greater Rift before time expires you'll advance to the next difficulty level. Should your time be exceptionally good, you might even skip a few levels! If time instead expires, you'll have reached the end of your current Greater Rift journey and your best results will be posted to the appropriate Leaderboards. 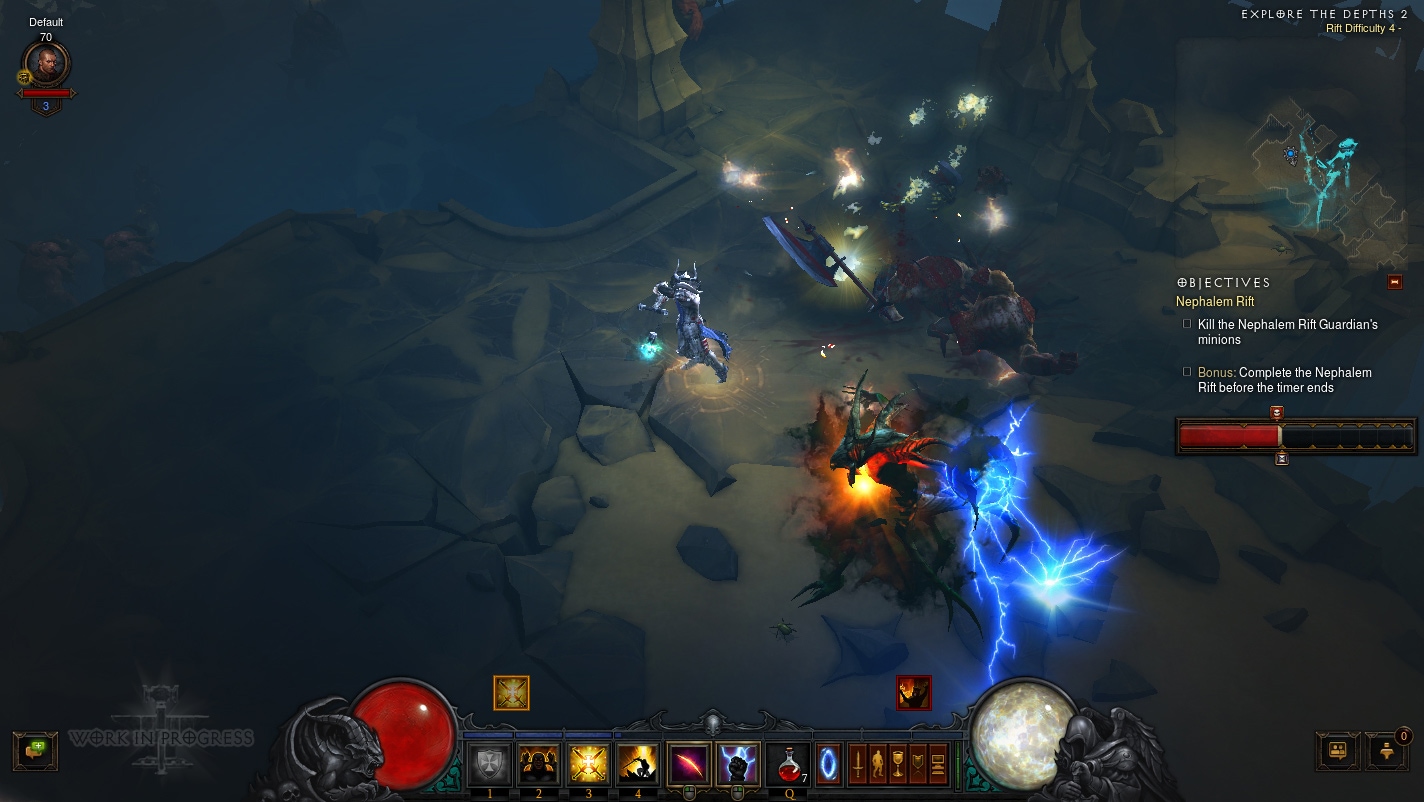 Your progress bar is a little different inside a Greater Rift, to allow you to gauge your completion compared to your efficiency.

Legendary Gems:
Greater Rifts are truly a challenge, and conquering such challenges should be met with great reward. To provide a unique and upgradable incentive, we're introducing Legendary Gems.

Legendary Gems are still undergoing significant iteration at this time, so you won't see them available on the PTR right away. The gist is that these gems are infinitely upgradeable, and provide special Legendary powers when socketed into the appropriate gear slot. They can only be socketed into Rings and Amulets, and can be upgraded by completing additional Greater Rifts. The higher you place in a Greater Rift, the more likely your gem will be successfully upgraded. We'll have more details in the future as we continue development on these powerful baubles, so stay tuned!

Coming to a Nephalem Rift Near You:
Some of the changes in Greater Rifts are also coming to regular Nephalem Rifts—like the way the completion bar will advance based on monster difficulty. In addition, we're slightly modifying the entry mechanism for all Rifts. All players will need to have a Rift Fragment in order to enter a Nephalem Rift; however, we’ve reduced the cost for entering a Nephalem Rift down to one Rift Fragment per character to compensate.

With so many ways to compete, we want to provide players with a quick and easy way to measure their progress. Enter our next big feature for patch 2.1.0: Leaderboards. Leaderboards will track progress for Greater Rifts, Seasonal achievement points, and Seasonal Conquests across a variety of game styles. Designed to be informative and detailed, Leaderboards will allow you to compare your progress to that of your gameplay region, friends, and clan members, and each type of board will track progress a little differently. 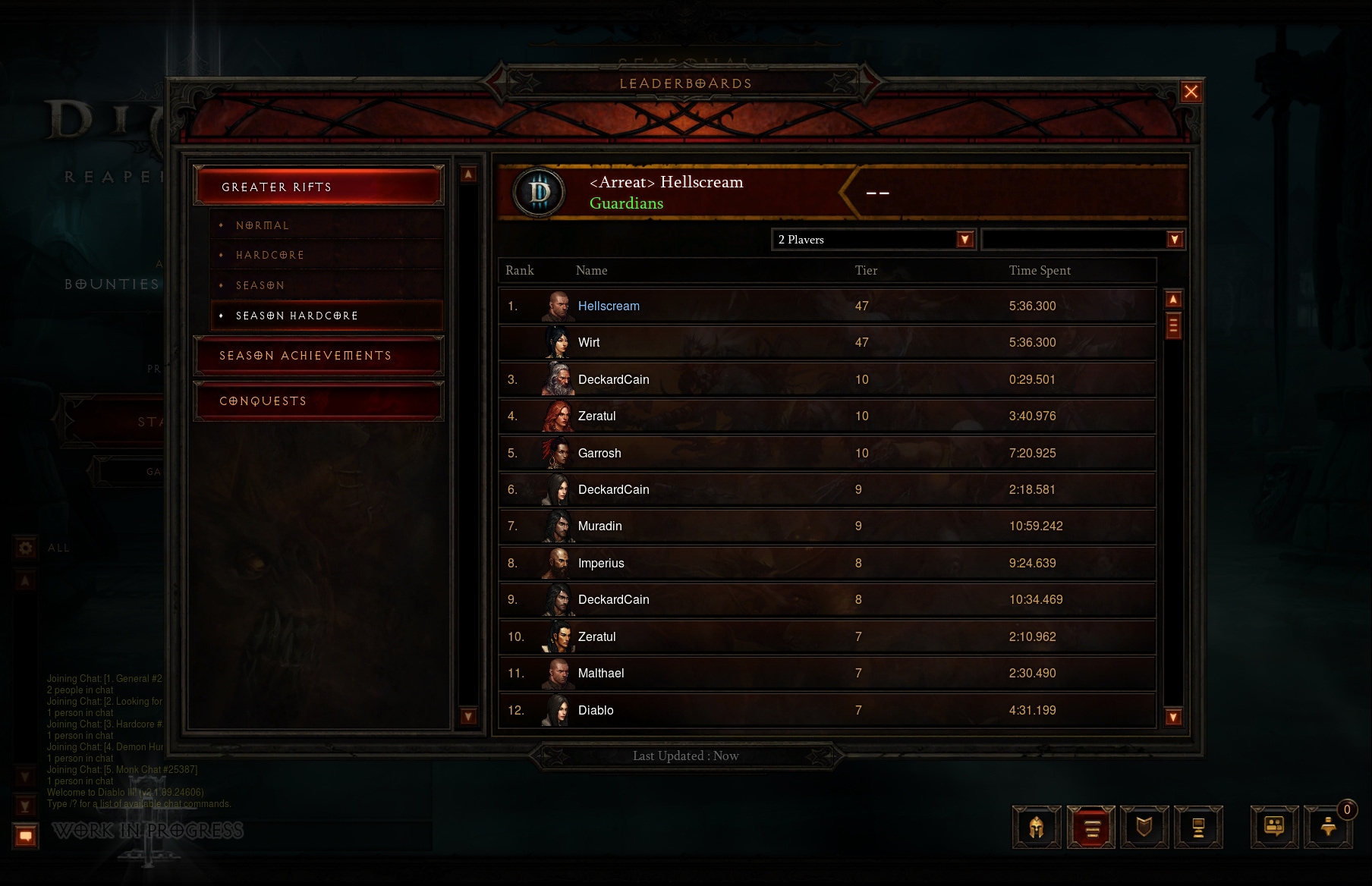 Leaderboards offer a variety of ways to compare your accomplishments to your friends and clanmates.

Of course, with so many competitive elements hitting the PTR, we're also reviewing each class thoroughly to ensure no matter what you play, you have a fair chance at reaching your Seasonal goals. While we won't be getting into class specific details here, we wanted to share with you a few examples of overarching tweaks we plan on experimenting with during the Public Test phase. There are some mechanics that, over time, haven’t performed quite as we envisioned. We'll be making some changes in 2.1 to help address these concerns.

Dexterity & Survivability:
A major change is coming to Dexterity to benefit Demon Hunters and Monks. Each point of Dexterity will grant 1 point of Armor instead of Dodge chance. Dodge isn’t as reliable as Armor or Resistances and doesn’t protect you from some of the most dangerous monster affixes like Plagued or Thunderstorm. In light of this buff, the existing passives that grant 30% of your Dexterity as Armor (Seize the Initiative and Awareness) will be completely redesigned.

Healing:
The next change will be to Healing. Currently, Healing provided by gear isn't very valuable because you receive the vast amount of your healing from Health Globes. During internal testing, we discovered that as you reached higher Greater Rift levels, you really wanted more of your healing to come from your gear in order to survive. To facilitate this, we are reducing the amount of healing Health Globes provide, but buffing Life on Hit and Life Regeneration on gear to compensate. This change should make a more consistent experience when you turn up the difficulty (or reach a higher tier in a Greater Rift) in situations where you’re not killing as quickly and actually require the increased Healing.

While Seasons and Greater Rifts are definitely taking center stage with this patch, we're also providing some additional content to add more variety and flavor to your Adventure Mode exploration. Originally designed as the sewers of Westmarch, we weren't quite able to include the Cesspools in the list of playable environments in Reaper of Souls by the time the expansion launched. 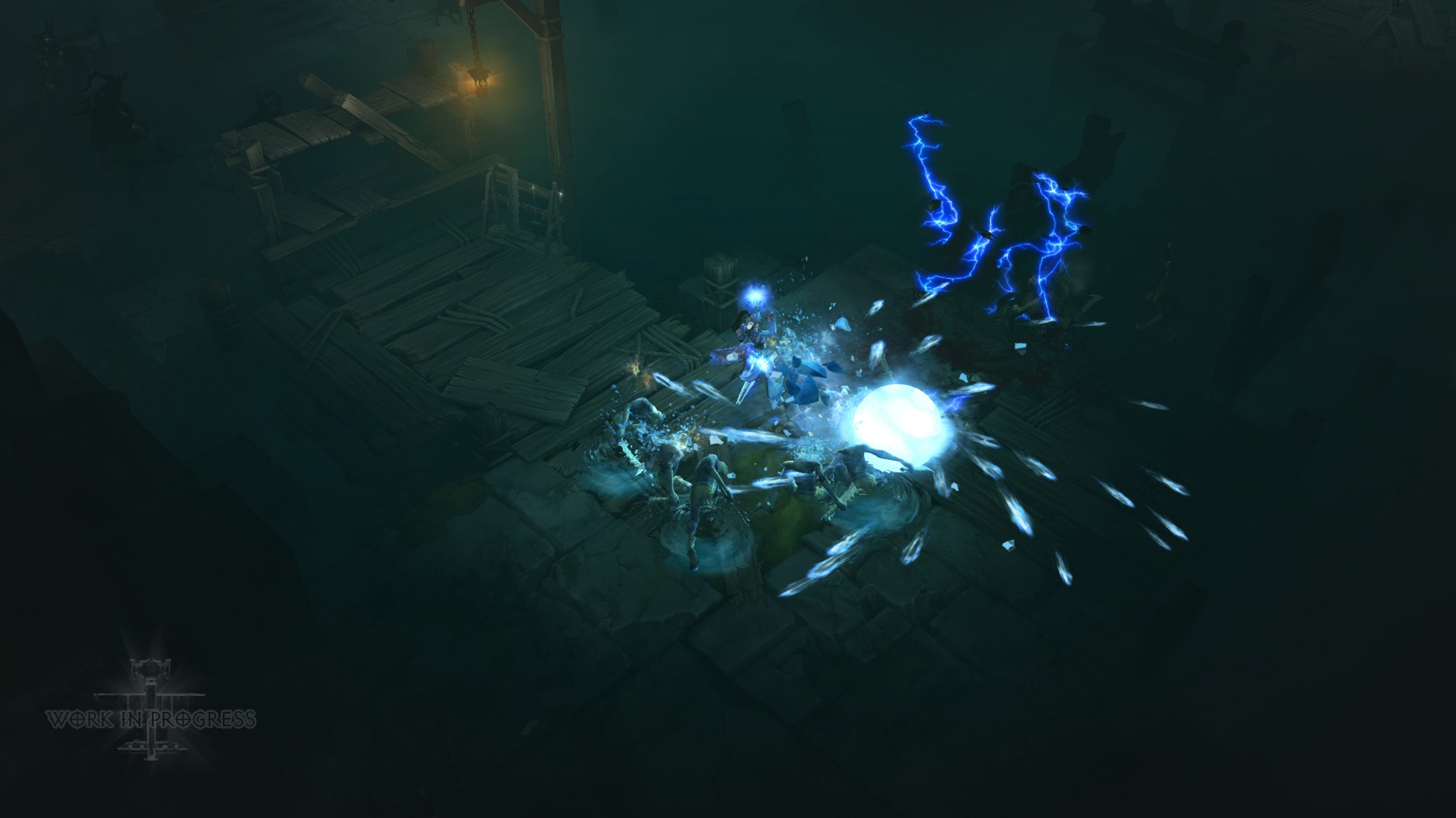 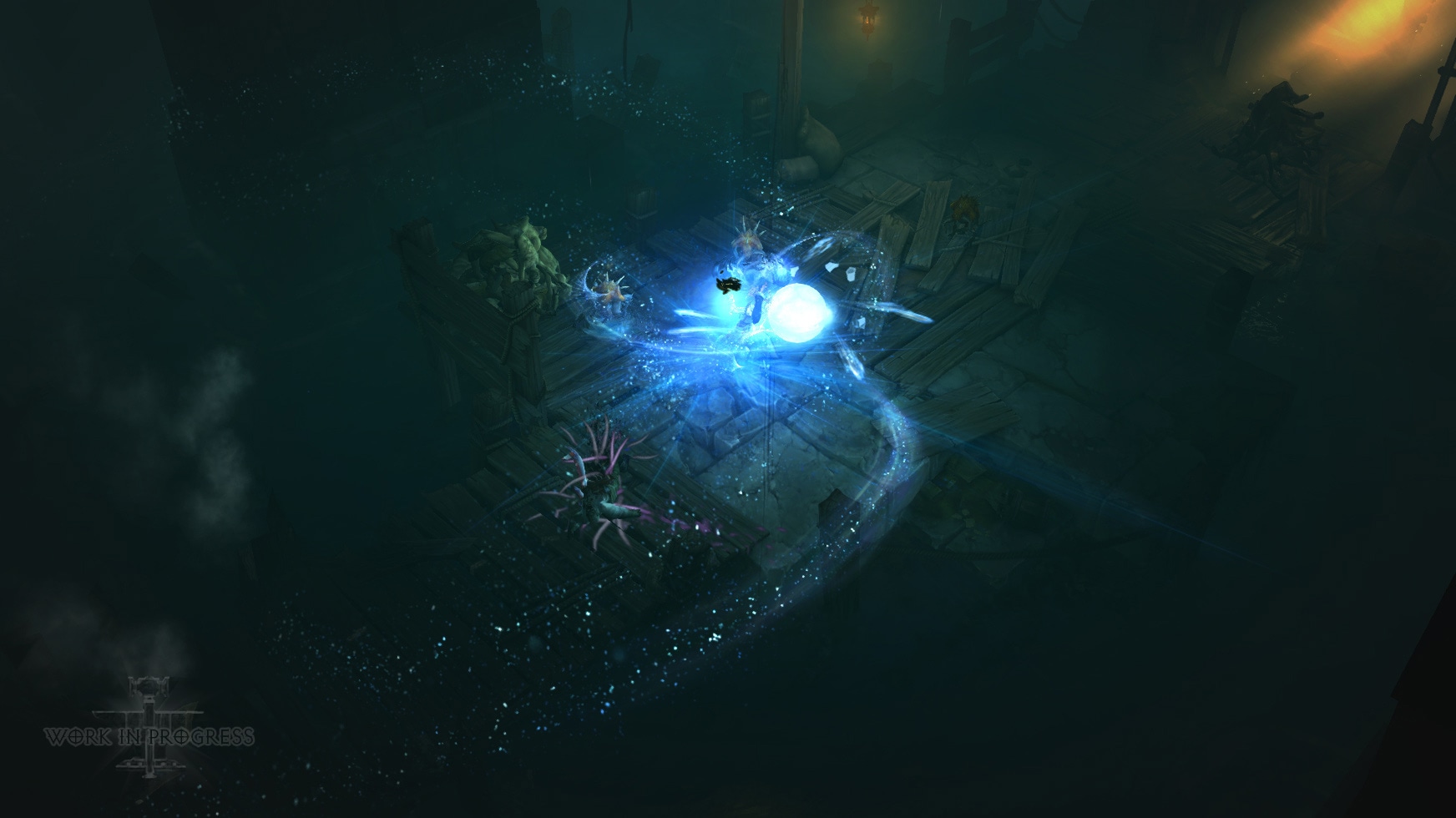 Expect to encounter (and slaughter) a variety of creatures in the Cesspools!

Still, we loved the look and feel of this festering, dank underworld and we've spent some time polishing it up for use in Nephalem Rifts and Greater Rifts. You'll have a chance to spawn Cesspool levels while in a Rift, and we hope you enjoy this new randomized landscape! We may have additional treats on the horizon, but let's not get too Greedy. . . . You'll have your hands on the PTR soon enough to find out more.We are incredibly excited to share patch 2.1.0 with you and can't wait to see your reactions once the PTR goes live. Be sure let us know what you think of the changes and features, and send any bug reports our way as you explore Seasons, Greater Rifts, Leaderboards, and more. What new feature are you most excited about? Are you going to climb the Greater Rifts leaderboard, or will you race to be the first to complete as many Conquests as you can? Let us know in the comments below, and we'll see you soon™ on the PTR!