Help Register Sign In
Ask the Devs at BlizzCon
BlizzCon is approaching and with it tons of information for Diablo III. To get a head start we decided to ask gather up some questions, specifically for Lead Writer Brian Kindregan and Lead Level Designer Dave Adams.

Anything you want to ask you can leave in our comments and we'll be sure to try to squeeze it in and ask the developers!

For those of you who are BlizzCon®-bound, we'd like to extend you a warm invite to the Community Corner, located between Halls B and C of the Anaheim Convention Center. Come hang out with the Blizzard Community team, rub elbows with fellow nephalem, play games, and maybe even meet a developer or two.

Speaking of developers. . .
Throughout the show, different members of the Diablo® III development team will be swinging by the Community Corner. Got a question related to itemization? Want to learn more about the Crusader? Perfect! This is an awesome chance to sit down and chat with some of the mechanical minds behind the game and its upcoming expansion, Reaper of Souls™.
Below is our booth schedule for the weekend, so be sure to mark your virtual calendars:

Friday, November 8
Saturday, November 9 In addition to hosting developers and chatting you up about Blizzard games as you saunter by, the Diablo III community team will also be giving away enough loot to rival even the best Treasure Goblin hauls. (Literally!)
The giveaway is simple: find a Treasure Goblin, win its loot bag. Here's what's up for grabs: Tune in to @Diablo or stop by the Community Corner for details on how to participate in our epic Treasure Goblin Hunt giveaway.

We hope to see you there. Don't forget to also check in at the Meeting Stone and the Tournament area nearby, as well!

Which Diablo III BlizzCon Panels and Activities Are You Most Excited About?
There is a poll going along with this blog post and you can give your vote in the original post.

In just over 48 hours, the doors of the Anaheim Convention center will open, and the full force of BlizzCon® 2013 will be unleashed upon attendees as well as those of you turning in from home with a Virtual Ticket!

Each of day of BlizzCon is overflowing with panels and activities ripe for the taking, and in addition to crowd favorites like the BlizzCon Costume Contest and live concert, there are also quite anumber of Diablo® III- and Reaper of Souls™-related festivities to check out!

So, with that in mind, for this week's community question we want to know: Find out more about what diabolical events we have in store below! 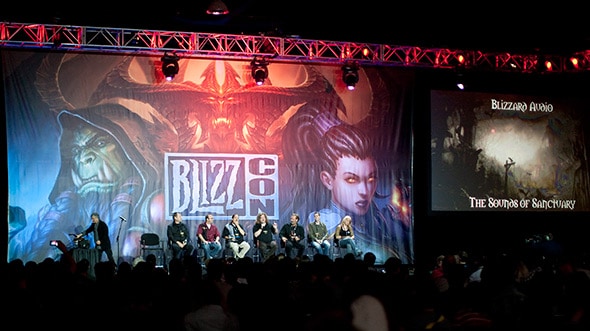 Diablo III: Reaper of Souls Gameplay Systems + Crusader
Diablo III Open Q&A
Diablo III: Heroes of Sanctuary
Diablo III: Cast of Sanctuary
Specific locations and further information for these and other panels can be found on the official BlizzCon website:http://us.battle.net.../en/event-info/ 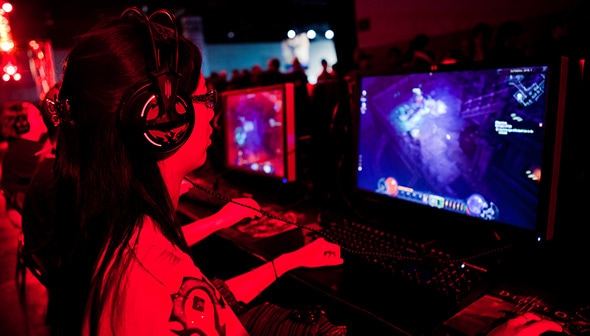 If you're attending BlizzCon in person, you'll also have some other sights and sounds to experience and fill your day with epic memories:

There's certainly a lot to see and do at BlizzCon 2013, and we'd love to hear which Diablo III BlizzCon panels and activities you're most excited about. So let us know in the poll below, or you can leave a comment to tell us more about your BlizzCon plans!

Blizzard at DreamHack Winter 2013
Blizzard will be attending DreamHack this winter and some of their games will be playable. There might also be a few surprises for the attending!

We’re delighted to announce that once again we'll be present at the world's largest digital festival—DreamHack Winter! This year the event takes place November 28 – December 1 in its traditional home of Jonkoping, Sweden. 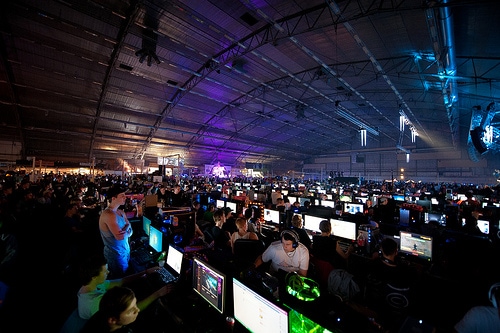 DreamHack Winter 2012, photo by Oskar Uhrbom
As always, we’ll be providing heaps of on-site entertainment and hosting various activities during the festival for you to take part in.

This year you can visit our booth to try out our newest titles including Hearthstone: Heroes of Warcraft, and the Diablo III expansion, Reaper of Souls, on PC. That’s just the tip of the iceberg, though: we’re working on a bunch of other activities, entertainment and competitions that you can get involved with, and we’ll have more details for you as we get closer to the event. 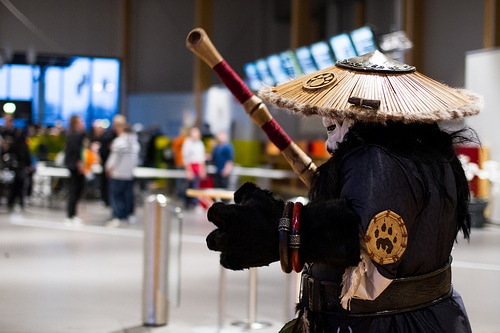 To find out more about DreamHack Winter 2013, visit the official site, and be sure to look out for more information coming soon.

The New Legendaries and Smart Drops in RoS
A long discussion appeared on the official forums concerning the Legendary items that will be added in Reaper of Souls and if they'll drop for players that haven't bought the expansion. Also a lot of information and details on the Smart Drops system.

We're still deciding whether or not brand new Legendaries will be added in the Loot 2.0 patch. Alternatively, we may restrict new Legendaries from dropping until Reaper of Souls is live, or they may be restricted for those with the expansion. That all remains to be seen at this time.

However, there's a lot of other stuff coming in the patch that may make some Legendaries feel completely different. First, all legacy Legendaries will begin dropping at the level of the monster that dropped it and won't be restricted to their original item level. This means, for instance, you might see a Level 63 Magefist drop after the patch. Because of this, you'll see a much larger variety of Legendaries dropping in general.

Second, many (but not all) Legendaries will be having their stat budget revisited. This is in addition to the smart drops system and narrowed stat range changes we've mentioned before.

Lastly, some (but again, not all) Legendaries will be having their powers completely redesigned. These new powers should be build-changing, and encourage you to experiment with your play style. I'm personally looking forward to seeing the kind of creativity that comes out of the community when these new items become available!

*Edited a bit for clarification.

I hope that at a minimum there will no longer be items with skills enhancement for a particular class that that class can not use (e.g.: WD skill bonuses on a bow).
That's the spirit of smart drops. In addition, smart drops won't occur with every single item that drops for you, but when one happens, it will be generally suited for your character (such as getting a larger amount of Intelligence based items on a Witch Doctor or Wizard).

Hopefully that doesnt mean though that DH will see mighty weapons with dexterity ...
Smart drops will also affect the types of items that drop for your hero, not just the stats on them. So, basically: if you're getting a smart drop, both the item type and the stats on the item itself will be tailored towards your class.

As Neva noted, though, items only have a chance to be a smart drop, so you may still see some one-off mighty belts and voodoo masks here and there. Significantly less than before, though.

so are u saying nats gaze will drop again or did u error on saying legacy legendaries
In this case, legacy Legendaries = Legendaries that drop before the pre-expansion patch goes live. So, no.

Kind of like what console has right now?
Correct. Smart drops on console were actually pulled directly from early Reaper of Souls development plans (those sneaksy designers).

is that means I cannot farm with my barb and hoping to find gear to gear my DH ? I like this idea. But did you consider that at some point the only gear you will find is going to be for my barb .
Sometimes I liked to farm with my barb to gear our heroes I have .
As noted, not all drops will be smart drops. There's only a chance that an item will be a smart drop (and thus tailored for your Barbarian), which means that you will still be able to farm upgrades for other characters on your account.

Will this affect Crafted legendary items?
Unsure on that at the moment. I'll look into this.

Are we going to know when we get a "Smart" drop (visual/sound/etc.)?
The question I have is: will there be some icon or other notification that tells us that the dropped item is a smart drop?
Smart drops are an internal mechanic, and there really isn't a need for an outward notification that one has occurred. An item that seems more tailored for your class, though, should send off the tip that it was probably (but not always) a smart drop.

At the end of the day, knowing whether or not an item "dropped smartly" is unlikely to impact whether or not you decide to use it. You'll still be assessing gear based on what stats or procs it ended up with and how that fits into your play-style.

Will this affect Crafted legendary items?
Unsure on that at the moment. I'll look into this.
I learned a bit more about the current design for crafting, and wanted to take a moment to share. =) Bear in mind, of course, that this is subject to change as development continues.

At this time, "smart drops" apply to all items crafted by a character. If it's a general item (like a chest or bracers, for example), the stats on it will be tailored to the character who crafted it. However, there is an exception: if the item in question can only be used by a particular class, the stats will instead roll for the appropriate class. If you craft a mighty belt, for instance, you can expect to see Strength and other Barbarian friendly affixes on it.

So in other words, can a class specific item which is not a smart drop, still roll a (main) stat for another class?
Nope! Class-specific items will only roll stats for the appropriate class, regardless of whether or not the item in question is a smart drop or which character acquires it. No more Int-tastic Mighty Belts or the like.

Similarly.. If I get a "smart drop" for my WD,will it be a 2 hand Bow with a WD skill? This is sooo absurd 8)
If it's an item that you can actually equip and it is a "smart drop," the stats will be prioritized for your class. If you can't use it at all though, don't expect it to roll stats that aren't tailored to your class.

Again, I feel it necessary to mention that we're still iterating on a lot of these details, but this is how smart drops are working as it currently stands.
Posts Quoted:
Reply
Clear All Quotes