Help Register Sign In
Diablo's 15 Year Anniversary is Tomorrow
Just a friendly reminder that tomorrow, the 31st, is our beloved franchises' 15th anniversary. Who knows what fun might pop up from blizzard.

ANZ Beta Invites
It looks like the next wave of invites have gone out and the last wave should go out next week! Good luck!

The second round of D3 Beta key have now been sent. The last wave will be out next week.

Blue Posts on Release Delay
Zhydaris, over on the Italian forums, has responded about the release delay once again emphasizing the delay has nothing to do with Korea. The posts were roughly translated by our very own pikke and a run over with Google by us to verify, so keep this in mind.

1) Do you think what Jay Wilson said , which is that the game will be about 6 months after the start of the beta is still your target? Or after the "push back" the claim is no longer to be considered?

Let's say that when it comes to release date should always be considered as the latest version of the facts that we announced with the message of Mike Morhaime about the release of Diablo III in 2012.
The beta is no longer an indicator of approaching the release date as the original plan has jumped when we announced in 2012.

2) If the title was delayed further, we should expect Diablo 3 to at least May / June 2012. How do you consider the idea that Diablo 3 will remain in beta for so long?

First I would like to confirm that we are doing everything possible to not delay the game further. There's nothing new about this, then everything is going well.
The fact that the game remains in beta for a long time do not concern us, we all know perfectly well that it is a demo of the game and does not contain all the features of the full game.
The beta still has its uses, of course, so that remains open is not negative.

3) If the release goes beyond March 2012, I would not say objectively that the target is still "early 2012", but what will happen should the beta last until February / March? I mean, there would be no impact on the Blizzard title listed on the stock market?

I do not think that the duration of the Beta Blizzard title will affect the stock market. The game is still planned for 2012 at the bottom. That said, I'm not a stockbroker and then I can not tell what might happen.

the Korean market is so important that you can afford to keep "STALL" the rest of the world?

Although a global launch of the game is always our preference, I would like to point out that there was not always possible to release the game simultaneously across the world and that this has not stopped the release of the game.

Just think of what happened in China with the expansion of WoW, for example.
Each region has always unique challenges, especially when it comes to business models (Brazil and Russia for StarCraft II) or legal issues (China and South Korea).

Looking back from Blizzard and its release, these issues have directly impacted the date of issue in other regions.


I was wondering ... it is so difficult and painful to say the truth?

I just did. Is it so hard to accept that there is no international conspiracy behind the postponement of a game?
The game was not in the condition we wanted it to be = we postponed it.
It should not be difficult to accept, we do it almost always, is not exactly new.

Why isn't the game out if it's almost ready.

The game is obviously very close to being complete, no doubt.
To me it's all in the definition of "game ready". Diablo III is playable from start to finish, there are no Acts yet to implement, and so on. All the classes are ready, all skills too.
The fact that it is playable, however, does not make it "ready" to our eyes.
I understand that in the Beta can not be noticed, but there are parts that are benefiting much from this extra time available.


Beta Screenshots
Today we bring you another set of Diablo 3 beta screenshots! 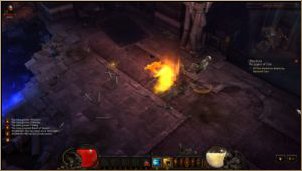 is LFM! We’re growing quickly and actively hiring for our Engineering, Sales, Content, IT and Marketing teams!

At Curse, you will have the opportunity to work with a young, growing team of passionate and talented individuals making a living doing what they love. Read on for a list of the available positions.

.NET Team Manager
Are you interested in leading the development team behind some of the most popular .NET-based sites in the world? We’re looking for a skilled technical manager to help organize and inspire our Live team.
More Info Apply Now

Senior System Administrator
Do you have experience with large-scale server clusters, virtualization and disaster recovery? We’re expanding our quickly growing IT group, and we’re looking for an experienced sys admin to help implement our infrastructure improvement plans in 2012.
More Info Apply Now

PHP Web Developer
Are you an IPB or MediaWiki pro? At Curse, we operate the largest IPB-based site in the world, and some of the largest MediaWiki sites. Join us and help continue to build the largest online game communities in the world.
More Info Apply Now

.NET Web Developer
Do you write Linq expressions and threadsafe singleton classes in your sleep? We need your help creating awesome new web properties at Curse. We have big plans for 2012, and we’re looking for rockstar developers to join our growing team.
More Info Apply Now