Help Register Sign In
(Source) The rest of an interview we saw last week has recently been posted on GameFront.com, and the topics are all very near to our hearts. Lead Technical Artist Julian Love, who has been working on the game for some years, had a nice little chat with CJ Miozzi, and while much of the interview is sadly nothing new, there's still a few nuggets that make it worth reading.

I've included the more interesting bits here. To read the full interview, which we highly encourage you to do, please see the article here. But beware: This may contain some content that some view as spoilers. To read more on the modding portion of this interview, check out our full modding article here.

GF: Was there ever a point in the development process when D3 would have been an MMO?

No, I don’t think there was ever a serious point. At the earlier stages, there were certainly many ideas being tossed around. There were many people at that point who where bitten by the MMO bug, but there was also people who thought, “hey, we should make a fighting game, or an adventure game.” So I think there were some phases when we weren’t serious and entertained a lot of ideas, but they were during that early stage when we just wanted to throw a lot of spaghetti at the wall and see what stuck. Even then, with the tools we were using, it looked more like a Diablo game than anything else.

GF: Has development started on any expansions?

GF: While there will be no official mod tools for Diablo 3, does Blizzard condone D3 mods? (Covered here)

There’s no direct intent to say that we don’t want D3 to be moddable. And, to be honest with you, the technology itself, on just a fundamental level, makes this the most moddable version of Diablo there’s ever been.

However, we have these other goals that supersede modding; we want to provide a safe and secure experience for players to play in and trade items in, and in order to do that, we had to make the game online play only. Once we made that decision, that effectively eliminated the possibility of having moddable games, since you’re going to have to connect to our service in order to play. So that’s a slight consequence of our online-only decision.

I’ll say that there’s never really been an intention with past Diablo games to make them moddable, either; it’s just that people found a way to make it happen. It’s not necessarily something we went out of our way to support.

GF: Hacked private servers were created for World of Warcraft; odds are there will eventually be a modded server or a way to play Diablo 3 without b.net, at which point people will be able to make mods. Would blizzard support such actions?

I think people will have a very difficult time doing that. I don’t think we’d be in a position where we can support that sort of endeavor, because it really falls outside of our development focus, which really is to provide this secure and high-quality experience that really demands an online-only game experience. 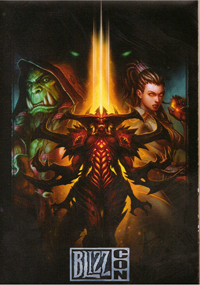 Cover of BlizzCon 2011's Program
GF: Will D3 compete with League of Legends, DOTA 2, and other MOBA titles in the eSports scene?

Absolutely not. There is no intention to make D3 into an eSport, and we are actively making design decisions to prevent it as being perceived as or even accidentally falling into the area of eSports. It’s something we’re very aware of. The intention is to recognize that players want to beat the crap out of each other, and to find a better way for them to do so than what D2 offered.

PvP of the past wasn’t so much a feature as it was an afterthought, or at least that’s the way it felt. So the way people tended to beat each other up was by socially engineering them into a situation in which they could quickly die. And that wasn’t very fun.

So by creating its own space for PvP, we could keep the element of fun, but do it in a place where it’s fair.

GF: Diablo is being depicted in a drastically different art style than in D2; less hulking, more slender. Care to comment?

We had a lot of talk early on about how we should bring Diablo back, what we should aim for in the art style perspective. A lot of monsters are re-treated when brought back from game to game. One of the discussions centered around him being the Lord of Terror, and whether we needed him to be massive in order to equate terror. In the end, the feeling was that wasn’t necessarily the way to convey terror. That’s when we started exploring lots of different takes on Diablo, dozens and dozens and dozens of different concepts, including one where he was half-snake…

GF: You’ve been using the pronoun “he.” Is Diablo definitely male?

You know, demons don’t really have a gender.


So, there you have it. Do you think Julian Love's view of dueling's role in Diablo II, and the Diablo franchise, is accurate with your play experiences in previous games? Should attention focus on more "hardcore" PvP aspects, like making Diablo III a viable competitor in the growing eSports community? Does it makes sense for the Lord of Terror to be hyped-up on estrogen?
Posts Quoted:
Reply
Clear All Quotes