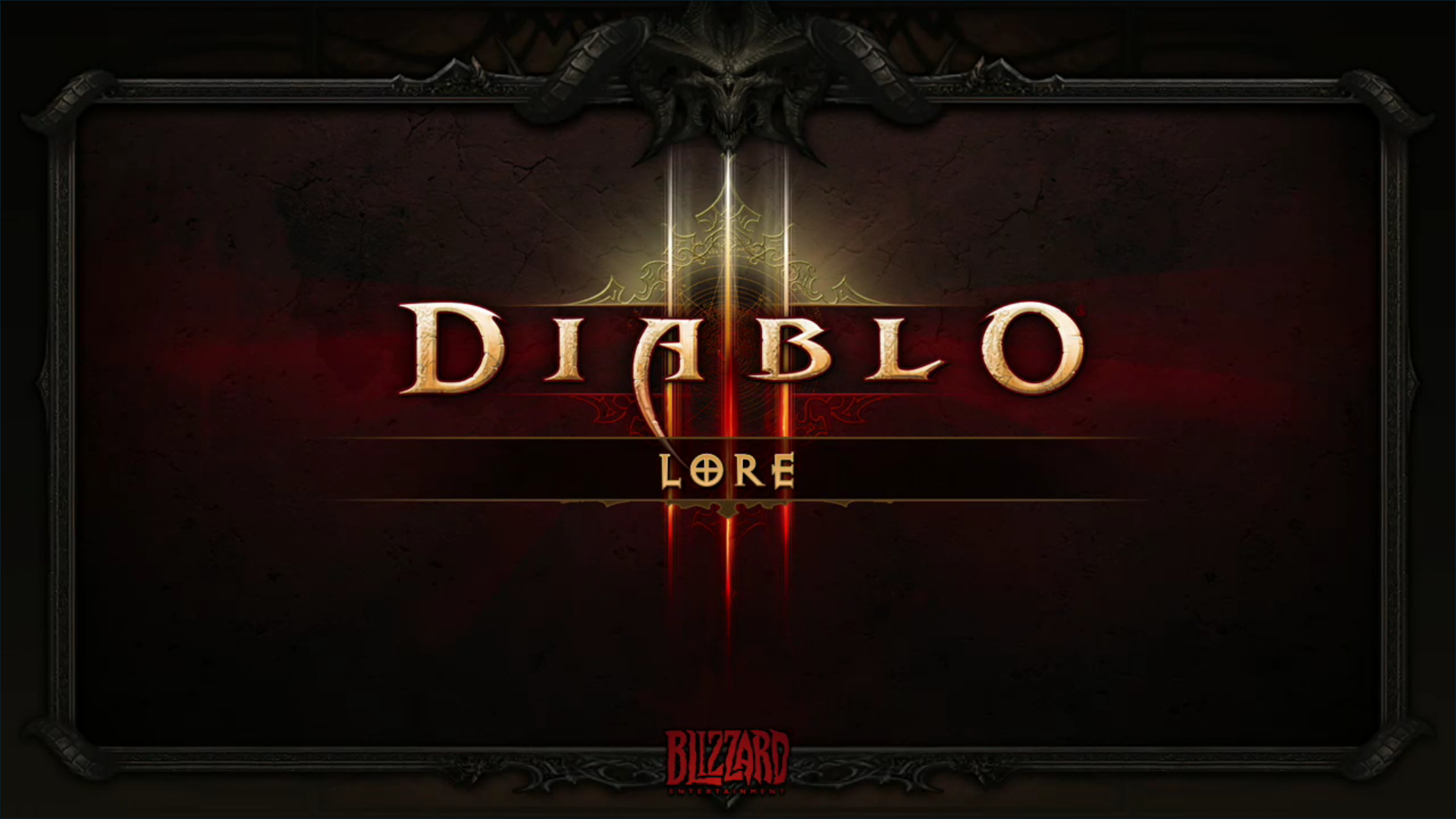 Let's begin with the stuff we already know, or at least we thought we knew. With the introduction of the Book of Cain, the aim of this release is to help consolidate, sharpen, and retcom the lore of the previous games. Chris Metzen commented how the original lore of the franchise was basically a mess with so many people with their hands in its creation. Much of the lore is remaining the same but there are some clarifications and minor changes that they needed to change to help tell a better story.

Starting at the very very beginning, the Diablo team has created an origin of their Universe. Legend in the Book of Cain, two primordial beings were in a constant struggle between good and bad. Anu, a creature representing good made of primarily diamond and Dragon Tathamet, a seven-headed dragon who breathed evil. The two destroyed each other and the after math essentially created the High Heavens and the Burning Hells. A part of Anu, the Crystal Eye, created the Worldstone. The Worldstone is said to be able to create worlds and reality. It is this Worldstone that the Angels and Demons are fighting over.

This fight takes place in Pandemonium. You may remember a part of this area from Diablo II before going into Hell. For hundreds of thousands of years, Angels and Demons have fought over control over this area and the Worldstone itself. Inarius, an Angel, and Lilith, a demon, were sick of this eternal struggle so they decided to leave this battle and create their own world. They manage to get to the Worldstone and essentially steal it from the Pandemonium. They bring the stone into another dimension and in this dimension they create Sanctuary, a paradise. Eventually, Angels and Demons procreate and create the Nephalem. The Worldstone slowly drains the Nephalem's powers reducing them to mere men while innately, they hold the power to be stronger then both Angels and Demons.

Now, some Angels and Demons eventually find out what Inarius and Lillith has done and discovery Sanctuary. However, both sides agree to let man live without influence of either side. However, demons being evil, they decide to try to corrupt man. The three prime evils set a plan in motion while Azmodan and Belial are unhappy with the break of the pact with Heaven. After exiling them to Sanctuary, Belial and Azmodan create a civil war for power in Hell.

Back on Sanctuary, it has been retconned that the actual hero from Diablo I is Aidan, King Loeric's eldest son. As for his back story, Aidan was missing from Tristram right before the events of Diablo I because he was leading an attack on Westmarch, an order made due to Diablo's corruption of King Leoric. He comes back to Tristram to find out his father has gone mad and his younger brother has been kidnapped by Lazarus and we all know what happens from there. Just to note, a big reason for this change was merely to give this character more weight and importance to help tell a better story.

Moving on from the past, the panel moved to the importance of the role of Angels in Sanctuary. It was mentioned that they have developed a lot more into this side of the conflict to help build and expand the world of Sanctuary. It was mentioned that their role will only get bigger as the franchise progresses. The Angels are created from the Crystal Arch, Anu's spine, of light and sounds. As far as going to the High Heavens themselves, it was not answered one way or the other. The biggest section of the Angels and the High Heavens is the Angris Council. A group of five Angels comprise of the council and rule over the Heavens.

Opposing the Angels are the main Demons of Diablo III. Belial and Azmodan are the only two remaining Evils after the events of Diablo II. With the destruction of the Worldstone, their focuses have moved to Sanctuary.

Belial the Lord of Lies

Belial uses coercion and lies to get others to fight for him. The Triune and vipers are underlings to Belial. It was also noted that in gameplay, many of his underlings will appear human and then turn on you. Belial's pressence will be encountered in Act II around Caldeum. The once prosperous city has fallen and refugees are on the verge of death. Your hero will come into the story trying to figure out how the city has fallen and why Belial is there.

Azmodan the Lord of Sin

Azmodan has two of the sins in Diablo III who work for him. Much more pronounced and hands-on the Belial, Azmodan had ruled Hell for over 300 years and is now emerging in Sanctuary to obtain the Black Soulstone to obtain the greatest power. His siege will pour forth from Arreat Crater to attack Sanctuary. On a side note, Sedeah, the Maiden of Lust, was originally the Mistress of Pain who was removed but brought back thanks to the costume contest winner of the 2010 Blizzcon.

While not much was revealed about the Black Soulstone is was said that Leah is trying to use it to capture and destroy Belial and Azmodan. However, Azmodan is trying to obtain it himself because it will bestow him power that will make him stronger than any other Demon in Hell.

Three new areas were shown from Act II. All three of these areas are playable and play an important part in telling the story as we progress through this Act.

Caldeum - Caldeum was the jewel of the East. In became the trading center for all of Sanctuary. However, there was turmoil due to the Zakarum, rich merchants, and Wizards all vying for power over the city. Hakan eventually took rule and united the three groups to create the most prosperous city. However, his death left a son to young to rule the city. The Iron Wolves, lead by Asheara from Diablo II, were hired to protect him until he was old enough to rule the city. However, Hakan II removed them and replaced them with his own Caldeum guards. However, Asheara is unsure of why he made this decision.

Dahlgur Oasis - This small paradise was the birth of Caldeum. A mysterious man rose from the waste and showed the original settlers this source of water which was used to help begin Caldeum. However, the story is said that this mysterious man disappeared back into the waste after showing them.

The Archives of Zultun Kulle - Zultun Kulle was one of the original members of the Horadrim who helped capture the Prime Evils the first time. However, he eventually became corrupt and evil. He was so strong that they could not kill him they cut him in half. They removed his head and buried it underground surrounded by magical runes. His body has sent into another dimension.

I will be paraphrasing these questions. We will have complete video coverage of the panel later for direct reference.

Q: Is Adria dead?
A: Yes, you will find out how in Diablo III

Q: Can Angels become Demons?
A: No, but they can be corrupted and become evil. You will also see Izual again in Diablo III.

Q: Who is Leah's father?
A: No comment (Although this is odd because it was already released that Aidan, the hero from Diablo I, is her father.

Q: Will the heroes from Diablo II have an appearance?
A: To some degree. Some are hinted at. The Necro's apprentice is in Act II.

Q: What was the effect of the Worldstone's destruction?
A: Azmodan's invasion is a direct effect. Also, it is possible it was not actually destroyed since it was only in Sanctuary as a shift in its dimensional existence.

Q: Will Trag'Oul be in Diablo III?
A: No, after putting the Necromancers' on their path, he has disappeared.

Q: What about the lesser evils not having soulstones?
A: "I wouldn't leave them"

Q: Why is Arreat Creater the place of the invasion?
A: Logically, it is where the Worldstone disappeared so it is likely the place where reality is weakest currently.

Q: Will items connect with lore?
A: Yes, a lot of Legendary items are tied to lore of previous and new lore.

Q: Will Ormus appear in Diablo III?
A: He was and then removed but I would like for him to come back.

Q: Will we see any areas from Diablo II?
A: Other than Tristram, no.

Q: Why does Diablo need a human body but not always?
A: He primarily needs a body because he is weakened in Sanctuary. It is also because being a human host helps anchor him into the dimension of Sanctuary.


You can also see every image shown during this panel here.