In the old days, Diablo II characters were about as unique as an

Arctic Binding (Diablo_II) belt. The prevalence of cookie-cutter builds only compounded the limited amount of visual differentiation between equipment, and cosmetic distinction ended where player biographies did.

Sanctuary and beyond, player banners add as much customization as you have patience. In this article, we'll explore the components, limitations, and uses of banners, and discover how they will let you leave your mark on Sanctuary.

Every banner has three essential components: the base banner, the sigil, and dyes. These three parts each have even more options of their own, lending more player choice to the mix.

If we think of the banner as the bread and butter of your character's identity, then the base banner, itself, would be the bread. But do we cut that bread into triangles? Perhaps squares? Diagonal strips? Rhombuses? Tetrahedrons? After all, geometry is fun!

A screenshot of the
banner GUI
No. Every banner has a variety of cloth shapes, ranging from battered to suave and everything in between; meaning, Blizzard has gone through the trouble of pre-defining shapes and designs for every banner. Selecting any one of these causes selected banner colors to morph with the new design, at which we'll get a closer look when we discuss dyes.

Whether you're trying to be the baddassiest Barbarian on Battle.net or want to treat your online persona like a meme, it all begins with the banner shape. Whatever you choose, you will be influencing how other players see you, including your attitude and playstyle.

Think of your sigil like your signature. It's the backbone of your Diablo III identity, your stamp of approval on every action you carry out in the game world. The sum epicness of all your adventures, all your daring feats, and all your accomplishments is symbolized in this monochromatic, two-dimensional seal.

Or it could be something completely stupid and meaningless, like a unicorn. Your choice.

In addition to symbols representing each of Diablo III's character classes, ones that appear to personify iconic Diablo factions, two demons, and a fanciful unicorn, there are even options for the Alliance and the Horde, as well as representations of each of Starcraft II's races.

Just below the sigil selection list, there is also a tickable box called Variant. For many of the sigil designs, there are two options: the variant and the original. The variants often have additional flourishes or other graphical elements that make the sigil even more unique. Example:

What if the sigil just doesn't look classy enough? In addition to the sigil, itself, there is a further do-dad that you can stamp on your banner: an accent. (If you're overwhelmed at this point, take a look at this diagram.) Accents appear just under the sigil, a bit of nonsense to make your personal sigil all the more personal:

But there's more to a sigil than its appearance.

In addition to the rather boring, front-and-center default position, sigils may also be moved around on the banner and duplicated by predetermined options.

Diablo III gives you
the power to make your banner
as ugly as you like
Last but certainly not least, we have dyes. You can stain three components of your banner: the pattern, the sigil, and the base banner. Often times, the color for the base banner will come through as the borders of the cloth, but this isn't always the case.

It should be noted that banner dyes are the not same as the dyes that we see in-game. At this point, we have no reason to believe that dyes you gather for your equipment can be applied to your banner, as there is currently no inventory correlation. This may change during or after the beta, but it looks safe to say that the two are entirely separate.

While there are a number of awesome features that help make each banner unique, there are some things you just can't do. As far as Diablo III is concerned, what you see is often what you get.

For instance, don't hope to position your sigil at any (x,y) coordinate beyond the choices presented to you. Your sigil goes where Blizzard says it goes, end of story. You also can't layer sigils over each other or choose more than one, as seen in the layering feature of Call of Duty: Black Ops' player card emblem designing interface.

Furthermore, the colors you have are what you can use. No fancy color wheels, hexadecimal color code boxes, or any of that modern nonsense is present here. Of course, the twenty-two dye options seem to cover the bases well.

But enough about the details. What does the banner actually do? 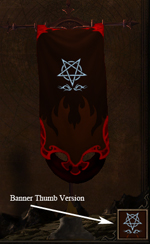 Banner: pocket edition
Banners appear in a number of places, but they don't always look like waving standards. In banner creation mode, you will notice that in the lower, right-hand corner of the banner interface there is a little square that mimics the sigil area of the banner. This little guy is what I like to call the "banner thumb," much like images often have a thumb version which represents the larger one.

The most obvious usage of banners is to represent characters in a party. In Diablo III, parties remain persistent, whether you're in a game or just hanging around chatting between games. The party leader has the privilege of banner representation in this instance; it billows just behind the party leader, with party members gathered around it. Outside of games, the banner thumb of each party member is also shown on the right-hand side of the screen in a neat column.

The social interface
The social interface makes heavy usage of the banner thumb. Here, as in the out-of-game party screen, friends are represented by a number of data bits, including Battle.net account, character name, level, class, and so forth, but the most visual element in the left-hand list is the banner thumb. The "recent" tab, which shows a list of players that you recently stomped the forces of Hell with, shows player information in a likewise fashion.

Banners gathered around
the

New Tristram waypoint
In-game, banners play several roles. Pressing the G hotkey will drop your banner from the heavens into the earth, there to be adored by any nearby players. For the life of me, I can't figure out what good this really does, except to serve as some kind of primeval testament to territorial ownership (much like a dog pissing on a fire hydrant.) Some have speculated that it might be some manner of call-to-arms for PvP, although that would seem to require entrance in a separate arena game.

UPDATE: Negropotamus has confirmed that the place-able banner allows team players to define where their other team members appear when using the banner near the waypoint. Useful for those tricky moments when you know waves of angry Undead will be spawning all over you during, say, the

Jar of Souls quest in the

But far more interesting than that is pictured at the left: Banners serve as portkeys to the player represented. A feature inline with Blizzard's focus on getting players into the action as soon as possible, clicking any companion's banner will send you hurtling through the

Ether to where ever that player currently is. No consumable items required, and the process takes only as long as your crappy computer needs to load the next area.

Banner Stuff Not in the Beta

From an article at EuroGamer
There are also a number of banner features that have not yet been implemented in the beta, features that we will likely not get a hands-on preview until the game actually releases. Among these are various adornments to your banner in your character's profile.

A Throne of Bones: Hardcore players get to show off their status with a special pile of ghastly ruin at the foot of their banners. This grizzly marker helps distinguish the regulars from the sadistic thrill-seekers.

Banners for Your Banners: In a redundancy scandal similar to NeoPets' PetPets (pets for our pets? really?), your character's advancements further specialize his or her banner with streamers hanging from the crossbeam at the top.

Whether you're a gear-hording hermit or a player-assassinating homicidal maniac, images speak volumes louder than actions. Your banner represents the core of your character, your online persona, and will go before you as a precedent to future relationships.

And any way to distinguish yourself from clamoring hordes of n00bs isn't such a bad thing, either.