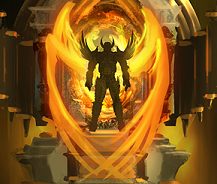 Imperius is a member of the enigmatic

Angiris Council. He is thought to be the

Archangel of War. Wearing crimson red robes and a gleaming breastplate, he is anything but patient. In fact, his name is likely derived from the word imperious, which means overbearing and urgent. He makes a cameo appearance in

Sanctuary and it's denizens. If humanity had an angelic enemy, he is certainly the number one candidate. Below are some quotations directly from The Sin War that show just how much Imperius despises humanity.


[Imperius talking about Sanctuary]
THERE IS NO NEED FOR THIS DEBATE TO CONTINUE....OR TO HAVE EVEN BEGUN, declared a majestic angel with robes of royal red and a shining breastplate upon which the image of an upturned sword blazed. THE PATH IS OBVIOUS....WHAT HAS BEEN WROUGHT BY THE TRAITOR MUST BE UNDONE! LET THE HOST FINISH WHAT IT BEGAN, EVEN IF WE MUST CUT THROUGH A HUNDRED RANKS OF DEMONS TO ACCOMPLISH IT!

[Imperius talking about Inarius]
FROM HIS CRIMES WAS THIS ABOMINATION CALLED SANCTUARY CREATED! JUDGE ONE, AND YOU RIGHTLY JUDGE THEM BOTH!

[Imperius talking about Inarius and Sanctuary]
I SAY THAT THE RENEGADE MUST BE FOREVER IMPRISONED AND HIS NEST OF DEMON-SPAWN ERADICATED!

[Imperius talking to Tyrael]
WELL, OLD FRIEND? asked Imperius. HOW WILL YOU CHOOSE, YOU WHO HAVE SEEN THEM AT THEIR MOST FOUL? WILL YOU VOTE WITH ME AND PUT AN END TO THIS MOST HEINOUS OF SPAWNING GROUNDS? 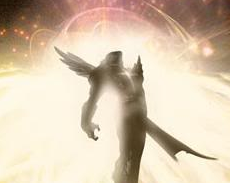 Perhaps his most notable physical feature is the blazing upturned sword on his breastplate. When I think of the natural state of a sword, it's being held by the hilt with the blade pointing upwards. Then if it were to be upturned it would be sitting on the tip of it's blade with the hilt towards the top. A cross could easily be construed as a sword in the Diabloverse where there are no real world religions.

Richard Knaak was asked about this from Diablofans member, TH3N00S3 he replied:

Thanks for your interest. There are two distinct and, imho, contradictory definitions for 'upturned'. In this case, I went with the definition that refers to an object turned business end up, such as 'an upturned nose'. This means the point of the sword would be toward the head. Based on conversations with Blizzard in the past, they see it the same way.

This certainly doesn't mean they couldn't have changed their idea of what an upturned sword is. Even Richard Knaak admitted the word upturned can really be taken either way in this case.

Now this takes us to Diablo3.com where the page initially said:

When Deckard Cain returns to the ruins of Tristram's Cathedral seeking clues to new stirrings of evil, a comet from the heavens strikes the very ground where Diablo once entered the world. The comet carries a dark omen in its fiery being and it calls the heroes of Sanctuary To defend the mortal world against the rising powers of The Burning Hells – And even the failing luminaries of the High Heavens itself.

But was changed a couple years back to:

When Deckard Cain returns to the ruins of Tristram Cathedral seeking clues to defeat new stirrings of evil, a fiery harbinger of doom falls from the heavens, striking the very ground where Diablo once entered the world. This fire from the sky reawakens ancient evils and calls the heroes of Sanctuary to defend the mortal world against the rising powers of the Burning Hells once again. 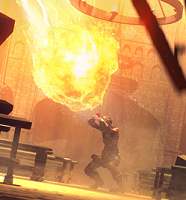 There is a pretty large difference here. In the first version it seems to hint at angelic intervention at some point in the story. In the later version it seems like they've pulled all that back to hint only at demonic influence. Perhaps they're planning for an expansion?

High Heavens were to intervene, at this point after their stance during The Sin War, it's rational to assume they wouldn't be friendly. 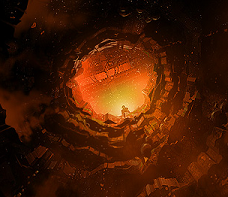 These quotes also seem to point to the importance of the comet, or what they would have us believe is a comet.

Tyrael makes it very clear that the Angiris Council does not approve of his meddling in the affairs of mortals. Is it possible that destroying the

Worldstone was the final straw? Could Tyrael have been cast from The High Heavens? I don't know of any

comet with that little substance. It is my belief this is Tyrael plummeting into the depths of the Cathedral.

Now after the events of The Sin War, no one would be more willing to toss Tyrael from the graces of The Heavens than Imperius. Tyrael was the deciding vote that could have landed Sanctuary directly in the path of angelic annihilation. In this piece of concept art it appears to be the same angel we see with the cross or sword on his chest to be looming above another

angel which appears to me to be Tyrael shielding his eyes.

If this is the case, Imperius wouldn't be acting alone. It's very likely that the Angiris Council of The High Heavens once again held a vote deciding the fate of the human race. This time we may not have came out so lucky. During the last vote the two angels that voted to save humanity were

Iltherael, who essentially agreed they wanted to let us grow and hopefully become allies. One thing is certain though, both The High Heavens and The

Burning Hells wish to use us as pawns. One wrong step in one direction and we'll become puppets to The Hells , to the other, The Heavens will destroy us. Heaven has been watching, and what have they seen? 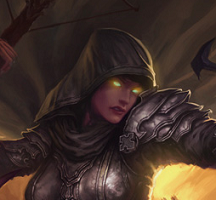 Prime Evils, after being unleashed, are all finally caught inside their own

soulstone. Then, by human error, all the stones were damaged. A horadric mage attempting to contain

Baal becomes consumed and corrupted, eventually leading to the corruption of the world stone. A religion is founded by

Akarat, based on the visions and teachings of what we are led to believe is an Archangel named

Yaerius. That religion evolves into the Zakarum church, which is infamous for its inquisition and then becomes the perfect staging ground for the corruption of

Mephisto. After being secretly usurped by the demon lord, the paladins of the church were sent on a crusade throughout the lands murdering all non believers suspected of the use of demonic magic. Mephisto then used the church to provide him with fresh human sacrifices.

A small group of heroes develop extraordinary powers, once again, and defeat

Diablo only to succumb to his taint later. One going on to become

The Dark Wanderer, one becoming

Blood Raven, and the last becoming

The Summoner in the

Nihlathak shows them that humanity is untrustworthy and has a thirst for power and a price at which we can be bought. In Diablo III the

Triune is emerging once again. Once a major religion in the world headed by

Lucion then, and now another demon. We have groups of humans known as

Demon Hunters, wielding demonic magics. We just may appear too much of a risk at this point, a loose end.

This time we do not have

Uldyssian to protect us. Will we be able to survive an onslaught from The Heavens trying to purge us and the driving forces of The Hells trying to enslave us? If Tyrael truly has been cast out of The High Heavens, what could this mean for our characters in

Diablo III? What could this mean for all of Sanctuary?


Disclaimer: DiabloFans' Rumors are not the officially recognized positions of the staff, management, and/or administration of DiabloFans
Posts Quoted:
Reply
Clear All Quotes