Twitter saw some updates this week clarifying some of the details surrounding PvP arenas. If you happen to be fuzzy on the upcoming arena environments, liquorice wrote an excellent summary of many of its features in Diablo III PvP - Battle Arena Environments. If not, onward to health orbs!

We've seen what health orbs do for players in the PvM context in the years since 2008's announcement, but how do they affect the PvP experience?

Diablo: @Scyberdragon [Health orbs] are on timers right now, which actually makes for interesting gameplay. If they were random you'd probably hover there.

Blizzcon 2010's arena gameplay demo certainly showed us how interestingly health orbs affected choices in the heat of PvP battles. As soon as the red orbs popped up, the choice had to be made: can I make it to the end of the round with half health or should I clear a path through my enemies--and possibly die--to get an orb?

Camping was essentially a non-option, not with the speed at which health was lost and the relatively long (challengingly so!) delay between health orb spawns. Of course, the option was there, and in some cases was the difference between a winning character and a dead one.

But with randomization being so heavily stressed throughout the game, why not set health orbs to random spawns? Bashiok responded:

Diablo: @Scyberdragon Randomness undermines some of the competitive nature of the arenas. You could "get lucky" with health globe spawns and win. 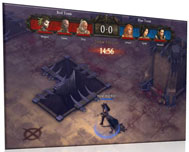 Getting lucky. We could very well sit here for hours posting arguments over whether or not setting them on a fixed timer eliminates the element of luck in even this single regard. What about players not keeping track of health orb spawn rates? What about running in to one by accident, just in the nick of time? What about losing health just as an orb spawns?

Regardless, the fixed timer will likely be but one of the many new components of Diablo III's arenas that define dueling pros and novices. As Bashiok noted, keeping mental notes of the average time between health orb spawns can free players to execute effective offensive tactics, as well as plan when to run to known orb spawning locations. Such knowledge could even be used to predict where low-health players, and thus easy targets, will go when the timer hits zero.
Posts Quoted:
Reply
Clear All Quotes