Help Register Sign In
We all patiently awaited what Blizzard was going to reveal at GamesCom and we finally got some new and integral information on Diablo III. Blizzard revealed their crafting system for Diablo III. Characters will be able to create their own gear through the use of Artisans, materials, and rare drops. Blizzard wanted players to be able to craft their own items without having to spend the time hammering away on an anvil creating them. Through the system they have implemented, other NPC's will be doing the hard work for us.

Let's start at the beginning. Firstly, how and where do we access these Artisans? The Artisans in the game are found through the main quests of the game. As you venture through the areas, you will probably run into one who needs you to help them or save their lives. After helping them and gaining their trust, the Artisans will continue with you on your travels. Setting up shop at the nearest city, the player will be able to interact with the Artisans whenever they get a chance to go back to town. 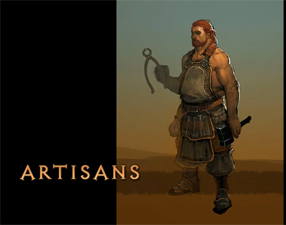 The type of Artisans that will be available to our heroes. 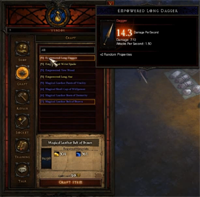 So how do each of these Artisans work? Basically, as you venture through the game you will get materials (more on this later) that you bring back to these Artisans to create new items. Each Artisan will need different types of materials to create their work for you. Random attributes being iconic of the franchise, the items they craft for you can also have random attributes added to them. In order to make stronger and newer items available, you will need to level up your Artisans through training. Upgrading will also have a visual change to your Artisans camp. The higher the level of your Artisans, the more impressive the look of their shop. Training to higher levels is done through more of the same materials needed to create the items. Along with this training, there will also be random drops of recipes to unlock other items. In true Diablo fashion, some of the rarest items will be obtained through these random drops. All three Artisans will also be able to specialize in certain areas when they hit the top level. However, all specializations are possible to learn.

Materials for these items are gained through salvaging items you find while playing. Each player will eventually gain an artifact that allows you to break down items into materials. This artifact allows you to make use of every item you pick up without having to go to town repeatedly to salvage the items. The materials that stack and each take up one square in your inventory can be more easily carried around until you have the opportunity to go to your Artisans and use them.

Q & A about the new caravan mechanic from the presskit:

Diablo III Caravan FAQ
Q: What is the caravan?
A: The caravan is a persistent group that follows the heroes across Sanctuary, providing a centralized hub for players to find quest givers, crafters, and other important NPCs. As your character moves through the world so too will your loyal band, setting up in specific locations to remain close by should you need them.
Q: Who are the artisans?
A: In order to access the professions in Diablo III, you'll need to gain the loyalty of various artisans through your travels in Sanctuary. The blacksmith, mystic, and jeweler will each provide unique services over the course of the game.
Q: What do the artisans offer?
A: Skilling up your artisans will unlock unique recipes, granting your character access to benefits that may not be found anywhere else in the world. The blacksmith crafts weapons and armor, and can add sockets to some items. The mystic creates scrolls, potions, magical weapons, spell runes, and charms, and can also enchant items. The jeweler crafts gems , amulets, and rings. The jeweler can also remove gems from socketed items and can combine gems to improve their quality.
Q: How do I find the artisans?
A: Finding the artisans will be part of the main quest. Each artisan has been fleshed out to include their own story and quest line.
Q: How do I use the artisans?
A: You'll collect loot as a reward for slaughtering the forces of the Burning Hells. Unwanted items can be salvaged in your inventory, converting these goods into raw crafting materials -- higher-level items are salvaged into higher-level materials. You'll then take those raw materials and hand them over to the artisans, putting them to work crafting or enchanting for you. Upon returning to the caravan after a lengthy foray, you may also find that the artisans have been hard at work plying their trade for your benefit.
Q: How do I salvage my items?
A: Players will find an item while progressing through the main quest that will allow them to convert unwanted gear into crafting materials from the inventory. This item will not take up any inventory space. This should be a more satisfying option for offloading unwanted loot than the alternative -- dropping things on the ground or making frequent trips to a vendor.
Q: Why are you including crafting professions in an action game?
A: Professions add depth to the item collection gameplay that drives the action of Diablo III. We want to provide players with an alternative way to acquire gear, potions, and other randomly found items. We also want to provide additional forms of customization for players -- adding jewels, enchants, or sockets to existing gear allows players to further tailor their characters. Many rare crafting recipes and materials are only found as world drops, enhancing the item acquisition process by increasing the diversity of items dropped by monsters.

Here is the transcript of the press conference including the Q & A with Jay Wilson.
Source

You can also download the presskit form the 2010 gamsecom conference here which includes screenshots, high quality announcement video and other goodies. Special thanks to pixartist for the link.