Help Register Sign In
As we all know, once Hell difficulty was conquered, Diablo II did not have much else to offer. Sure, you could grind

Uber Tristram, but outside of those two things there was hardly any PvM left once Hell was done. However, it seems things are going to change once Diablo III hits shelves, as indicated by Bashiok in this post.

I'm sorry for putting [a fourth difficulty] down outright, but it's not a very sexy solution to make the end game more interesting or exciting. Sort of just draws it out, or maybe resolves some pacing issues that existed in Diablo II, which was a different game.

I've said this a lot but try not to think of Diablo III as an extension of Diablo II. Things like experience curves are not a constant that we have to take from Diablo II, implement directly into Diablo III, and then be really upset about it and have to try to solve the problems they give us. This is a new game being built from the ground up, problems aren't inherited from the previous games. We can do whatever we want.


Personally, I think Bashiok is spot on about adding a fourth difficulty. While it may seem like a good idea to some, this would solve nothing. With this suggestion, we are essentially assuming that the three difficulties in

Diablo III will be scaled similarly to those in Diablo II, in terms of difficulty and overall content. We don't yet know how difficult each level of play will be (

Hell), we don't know how long they will be, or even if they will be the same game. Basically, we know nothing at this point outside of what Bashiok has revealed to us in this quote.

As was said, Diablo III is going to be an entirely new game. Problems that plagued

Diablo II obviously will not be intentionally included in the game. This (hopefully) means a new pace to the game. Where 3 difficulties took us roughly to level 80 in Diablo II, they could take us all the way to the level cap in Diablo III. If this were to happen, it would prevent a lot of unnecessary level grinding from taking place. This would leave us free to enjoy endgame content, and to enjoy the game. Due to this recent series of posts, I'm beginning to think this may happen. As always, bear with me for this next bit of speculation.

I was in a meeting with Jay and Wyatt earlier (about something completely different), and Wyatt expressed specifically that giving players some sort of end-game that doesn't involve grinding areas or bosses is something that keeps him up at night. It's a real problem, and it needs a real solution. It's also very much in the minds of our designers and something we will try to remedy as long as we need to.


From this post, we can conclude that the development team is putting a significant amount of thought into end game activities, be it quests, new areas, or bosses. Possibly even a new realm for players to travel to after completion of Hell. However, due to the fact that they're end game activities, we can assume that they will be more difficult than Hell, which in turn would require high level characters. However, this in turn would put forth a contradiction. If the end game activities are to prevent us from grinding areas or bosses, then would it not defeat the purpose of these if we had to grind areas and bosses after Hell is completed to be able to tackle the end game content? Thus, this may suggest 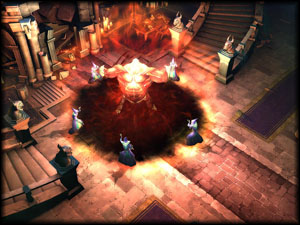 that the experience rates of Diablo III being scaled back slightly, to allow players an easier time of attaining a high level to actually be able to enjoy the end game content.

However, once more, this is all thrown up into the air by the fact that we cannot assume Diablo III is going to be like Diablo II. In principle, it's going to be a continuation. But, we don't even know if the difficulty levels are going to behave as they did in Diablo II. Hell may even turn out to be the end game content, with additional puzzles and scripted events provided to make the final run through an entirely new experience. Until we know more, it's incredibly difficult to peg down one thing that is for sure going to happen.

Anyway, we have many ideas, there have been many good ideas discussed out there on how to solve some of the end game issues. Some of them are pretty much spot-on for ideas we'll likely go ahead with. Most of that design and work on end-game hasn't started yet though. We're still working primarily on building out the core game experience (act-to-act world and dungeons and monsters). Just the basic play through on Normal. Which is coming along quite well still, I might add.


As always, the specifics of the ideas are not revealed. However, we do know that the content most likely will not involve significant amounts of grinding. Due to the fact that Diablo III already features random side quests, it may turn out that the development team is thinking about implementing random end game content to keep us satisfied. Of course, the difficulty and sheer amount of content would both have to be significant to keep us interested, but it can definitely be done.

Overall, this series of posts has me very hopeful for the end game. It is good to see that the development team has identified problems the players are worried about, and are doing their best to remedy them.

On a side note, if you're looking for a different take on this blue post, check out this thread by Airandius.
Posts Quoted:
Reply
Clear All Quotes