# Here is link to the leaderboards: http://i.imgur.com/ESe03Jr.png 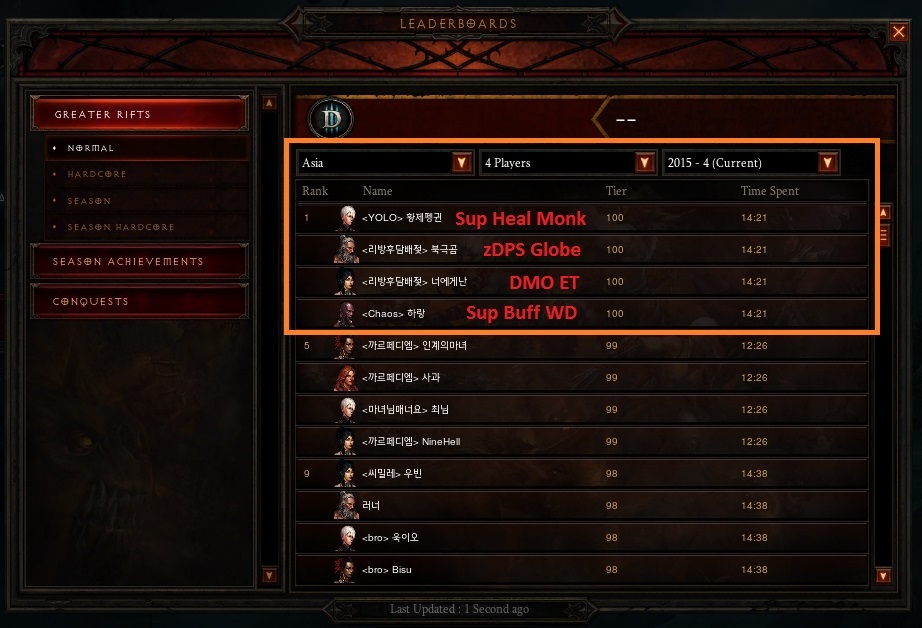 Illusory Boots (You may move unhindered through enemies)


** Make sure to cast Mantra of Healing - Boon of Inspiration to keep the healing effect going -http://i.imgur.com/toIgRKY.png

Once monsters are grouped you cast Blinding Flash to reduce the damage of the monsters by 40%.


YOU WILL ALWAYS WANT TO USE ILLUSORY BOOTS, NOT USING THEM WILL SERIOUSLY AFFECT YOUR RIFT TIMES.


The way this build works:


The Manta of healing - Boon of Inspiration gives you 7% increased Life Regeneration for your allies on top of the 20% Heal Amount of your Life on Hit, put that together with the Epiphany - Soothing Mist which gives 25% of your Health Globes healing, it keeps everyone alive in the party on higher greater rifts.


Crippling Wave - Breaking Wave is to apply an additional 10% damage from all attacks for three seconds, which is permanent since you're always attacking to generate your spirit.


You will always want to drop your Inner Sanctuary - Forbidden Palace to keep yourself and your allies alive as it does reduce damage taken by 55% and it also applies a 30% increased damage from all attacks to any monster inside.


Blinding Flash - Crippling Light reduces damage from monsters by 40% for 5 seconds, the enemies also have a 30% chance to miss with their attacks.


You could use any potion you want for this build, but I do prefer Bottomless Potion of the Tower to get that increased armor %.


I will be making an actual video guide on this build sometime in the near future when 2.4 will be just around the corner.


YOU WANT SECONDARY RESISTANCES ON ALL YOUR GEAR, EITHER LIGHTNING OR PHYSICAL.

OBSIDIAN RING OF THE ZODIAC CANNOT ROLL LIFE ON HIT

This build is part of The Ultimate Guide for Patch 2.4- Season 5, with all the new builds for all classes, you can see the spreadsheet here:
>>> www.tinyurl.com/S5Builds <<<


If you have any questions about the Skill-, Gear-, Stat-choices or anything about the build. You are more than welcome, to ask me on one of the following platforms:


e) In this guide on here on Dfans


This build will be up-dated regularly by Drahque. And daily on the spreadsheet: www.tinyurl.com/S5Builds


P.S. there is also D3planner Simulations for the build in-included in it.
Posts Quoted:
Reply
Clear All Quotes